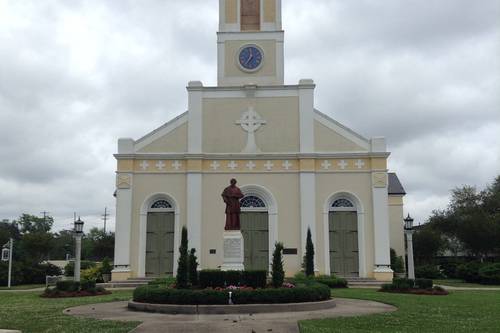 flickr/Maren
1 Photo
AAA Editor Notes
St. Martin de Tours Catholic Church is at 133 S. Main St. One of the oldest churches in the state, it was established in 1765 by a group of Acadian exiles. The present edifice, dedicated in 1844, has a replica of the Grotto of Lourdes constructed in the late 1870s by Pierre Martinet, a freed slave. Jean Francois Mouchet's painting of St. Martin of Tours hangs above the main altar. The white marble baptismal font was believed to have been a gift from Louis XVI.

A bronze statue of Evangeline, the heroine of Henry Wadsworth Longfellow's poem “Evangeline: A Tale of Acadie,” stands in the churchyard. Actress Dolores del Rio donated the statue after starring in the 1929 silent film “Evangeline,” which was shot in the area.