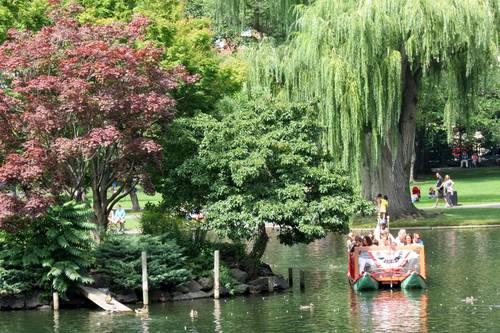 AAA/Inspector 46
1 Photo
AAA Editor Notes
Boston Common is bounded by Beacon, Charles, Boylston, Tremont and Park sts. This grassy area became common land for Puritans who arrived in 1630. Cows grazed on “the common,” and the verdant expanse later served as a military training field. In the 1860s the Oneida Football Club, considered by some to be the nation's first organized football team, played ball here.

Today, the oldest public park in the country and the city's favored leisure destination hosts a variety of concerts and special events. The 48-acre grounds shelter a number of monuments, including Augustus Saint-Gaudens' acclaimed Robert Gould Shaw and 54th Regiment Memorial in the northeast corner of the Common, across from the statehouse. Unveiled in 1897, the bronze high relief recalls Col. Shaw and the first African American regiment recruited in the North to serve in the Civil War.

Another iconic park feature, the Frog Pond, is at the heart of the Common. Sandwiched between a playground and an old-fashioned carousel, the pond—a spray pool in summer and an ice rink in winter—is one of the most popular hangouts for visiting pipsqueaks.

The Greater Boston Convention & Visitors Bureau Information Desk is on the Tremont Street side of the park (131 Tremont St.).