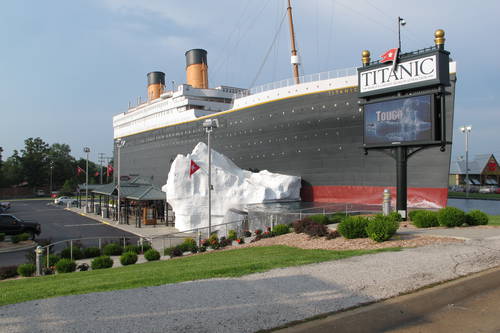 Wikimedia Commons/Brad A. Totman
1 Photo
AAA Editor Notes
Titanic—World's Largest Museum Attraction is at jct. SRs 76W and 165 (Gretna Rd.). Built at half-scale to the original vessel as far back as the second smokestack, this walk-through experience focuses on the passengers and crew aboard the RMS Titanic when it sank after hitting an iceberg on April 14, 1912.

Highlights include a replica of the ship's Grand Staircase and a 26-foot-long scale model of the vessel's underwater bow section as seen in the 1997 blockbuster film. Among other exhibits are a regenerating “live” iceberg, re-creations of a first-class stateroom and third-class cabin, an interactive captain's bridge and gallery rooms with displays of personal and historical artifacts.

Each visitor receives a boarding pass with the name and history of a passenger who was on the ill-fated ocean liner's maiden voyage.