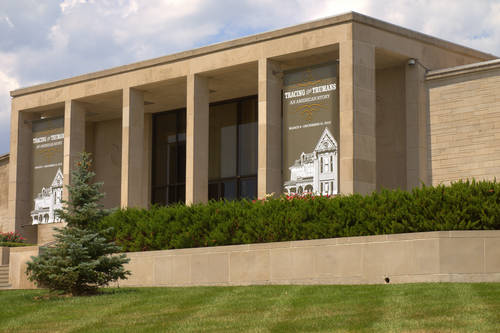 flickr/Jim Bowen
1 Photo
AAA Editor Notes
Harry S. Truman Presidential Library & Museum is on the n.e. edge of US 24 at Delaware St. The focal point of the museum is the interactive exhibit, An Ordinary Man, His Extraordinary Journey where visitors experience Truman's life through a winding path of alcoves, small theaters and innovative spaces. Plow to Politics details the Midwestern native's early years as a farmer and entrepreneur in Missouri, his marriage and letters to Bess Wallace, and his rise in politics that lead to his swearing in as the 33rd president of the United States. Archival footage, photos and objects of artistic and historic interest chronicle the difficult decisions Truman was faced with during his presidency and examine such topics as the challenges faced in the post-World War II years, the beginning of the Cold War and the status of the nation as Truman left office in 1952.

Other permanent exhibits include a replica of Truman’s Oval Office and the office in the Truman Library that he used every day until his health failed. The grave sites of President and Mrs. Truman, their daughter Margaret and son-in-law E. Clifton Daniel are in the courtyard.