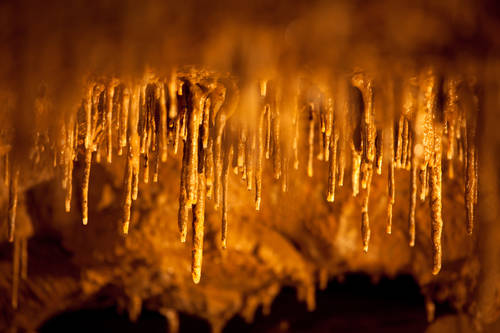 EvanTravels/iStockphoto.com
1 Photo
AAA Editor Notes
Meramec Caverns is off I-44 exit 230, then 3 mi. s. on SR W. Discovered in 1716, the caverns accommodated powder kilns and leaching vats for Union forces during the Civil War.

In 1864 the outlaw band of Confederate William Quantrill's irregulars, of which Jesse James was a member, seized the gunpowder mill. James was so impressed with the cave that he and his gang later used it as a hideout. This colorful history suitably came to a close when a man avowed to be Jesse James held an outlaw reunion in the cave on James' 102nd birthday in 1949.

The caverns feature five floors of colorful mineral formations. At the entrance are a mineral and crystal collection and an ultraviolet rock display. Gold panning, riverboat rides and ziplines also are offered. Guided tours take visitors along a mile of lighted concrete walkways; the cave maintains a constant temperature of 60 F.