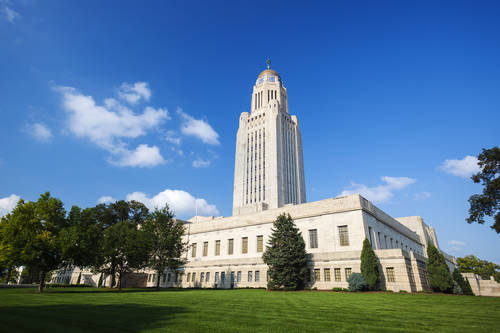 traveler1116/iStockphoto.com
1 Photo
AAA Editor Notes
Nebraska State Capitol is at jct. 15th and K sts. An outstanding example of Modern architecture, the structure was built 1922-32 around an existing building as legislators continued to meet inside; it is one of the few state Capitols constructed on a “pay-as-you-go” basis. “The Sower,” a 19-foot-tall bronze statue, forms the top of the 400-foot-tall central tower, which was constructed on the site of the original internal building.

The colorful mosaic dome in the rotunda and the ornate walnut ceiling in the Supreme Court chamber exemplify the rich ornamentation both inside and outside. A sculpture of Abraham Lincoln was created by Daniel Chester French, who sculpted the statue in the Lincoln Memorial in Washington, D.C.