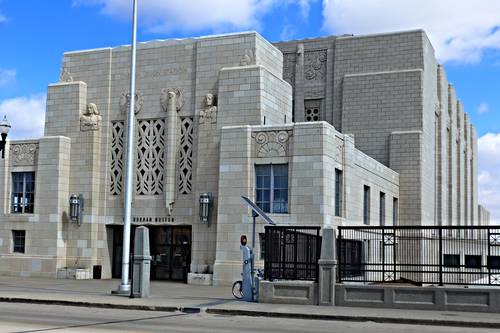 Wikimedia Commons/Ali Eminov
1 Photo
AAA Editor Notes
The Durham Museum is at 801 S. 10th St. The museum is in Omaha's historic 1931 Union Station, an Art Deco landmark with an exterior terra cotta overlay. Notable architectural details include carvings on the building's facade of six railroad employees, each holding a tool representing his profession; a conductor, a locomotive engineer, a civil engineer and a brakeman are among those represented.

The station's “Great Hall,” the original waiting room, is elaborately decorated in period. Highlights include a 65-foot-high sculptured plaster ceiling with gold and silver leaf trim, six chandeliers, and marble columns and wainscoting. Lifelike sculptures of train travelers are positioned throughout the room.

The museum's permanent galleries depict the history of Omaha, including the importance of the Union Pacific railroad to the region. Visitors can see a rawhide tipi and rooms representative of a “worker's cottage” from the late 19th through early 20th centuries as well as a prosperous, technologically up-to-date home of the 1940s. The evolution of the city over the past 100 years looks at the immigrants who helped shape Omaha, touching on topics such as religion, health care and area parks.

On the track level of the station are several train cars that can be walked through, a collection of antiques, a scale-model train layout, an interactive steam engine exhibit, a restored 1922 moving truck, a 1940s streetcar and a replica storefront from a 1915 grocery. Visitors also can enjoy an authentic, working soda fountain. Affiliated with the Smithsonian Institution, the museum hosts a variety of temporary exhibitions throughout the year.