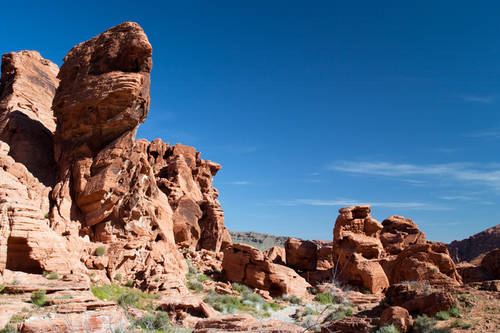 1 Photo
AAA Editor Notes
Valley of Fire State Park is 22 mi. s.w. on SR 169 and about 55 miles n.e. of the Vegas Strip via I-15 exit 75 (a 1-hr. drive). This 40,000-acre park, hugely popular with Vegas day-trippers, is a real beaut. Valley of Fire occupies part of a basin about 6 miles long and 3 to 4 miles wide; its rough floor and jagged walls bristle with formations of eroded red sandstone that date back 150 million years. The fiery colors give the park its name. This surreal visual effect is more pronounced in the softer light of late afternoon than under the blazing high-noon sun.

If you access the park at the West Entrance Station, the first scenic turn-out on the main road (Valley of Fire Road) leads to the “beehives,” red sandstone formations that look just like what they're called, only much bigger. Scenic highlights on the park's west side include Arch Rock, which sits atop a large mass of sandstone; Atlatl Rock, a towering sandstone wall with a large rock art panel (climb the metal staircase to the viewing platform just below the petroglyphs); and an area of petrified logs, reached by a graded dirt road turn-off.

The park's most rewarding scenic drive is the White Domes road, which begins near the visitor center. In addition to the domes there's a spectacular little canyon, not especially deep but filled with a jumble of striking red rocks.

Near the East Entrance Station is Elephant Rock, one of Valley of Fire's most photographed features. Walk the short desert trail to a spot just below this geological formation, which does indeed resemble a pachyderm. The undulating, gently winding park road passes a variety of beautiful red rock desert landscapes like the Seven Sisters, a group of large formations.

An atlatl (Aztec for spear thrower) was a device used before the invention of the bow and arrow to increase the speed and distance a spear could be thrown. Atlatl Rock contains a petroglyph depiction of this tool. Mouse Tank, a natural basin that collects scarce rainwater, was named for a reclusive Paiute Indian who lived in this area in the 1890s. A quarter-mile trail to the tank offers views of prehistoric petroglyphs.

The visitor center, on Valley of Fire Road about 4 miles east of the West Entrance Station, has a small museum with well-done exhibits about the park's history, geology and ecology. Guided hikes and activities for children are offered seasonally. Note: The nearest gas stations are in Overton and at the Moapa Valley Travel Plaza off I-15 exit 75.