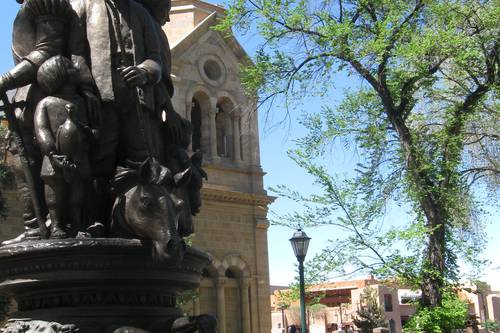 AAA/Greg Weekes
1 Photo
AAA Editor Notes
Cathedral Basilica of St. Francis of Assisi is 1 blk. e. of The Plaza on Cathedral Pl. Built to serve the fledgling settlement's Catholic community, this became the first church in New Mexico to attain the status of cathedral basilica. The parish was founded in 1610; the present church, built in 1869, is one of Santa Fe's most widely recognized landmarks.

Bordered by a lovely tree-shaded park, it's also one of the few downtown buildings that isn't an adobe. The cathedral's sharp, French Romanesque lines provide a striking contrast to the rounded contours of its neighbors, making it a popular subject to photograph.

Archbishop J.B. Lamy, who inspired Willa Cather's novel “Death Comes for the Archbishop,” is buried beneath the main altar beside missionary priests Fray Zarate and Fray Gerónimo de la Lama. When services are not being held visitors may view a display of ecclesiastical art in the sanctuary.