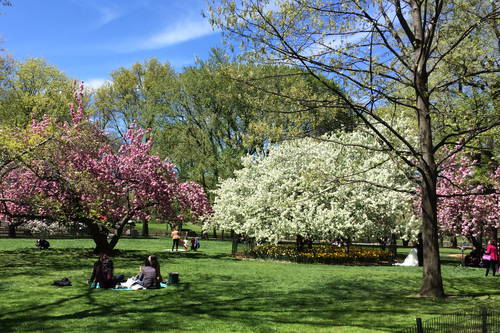 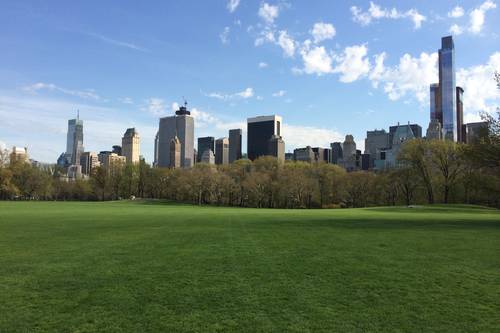 AAA/Inspector 514
2 Photos
AAA Editor Notes
Central Park, extending from 59th to 110th sts. and from Fifth Ave. to Central Park West, was designed as a refuge for New York City residents by architects Frederick Law Olmsted and Calvert Vaux. When New Yorkers want to get away from it all, the lush green expanses of Central Park provide a welcome retreat. It's the most filmed and photographed park in the world, yet its hidden spots and seasonal changes can still surprise even the most seasoned New Yorker.

Keep in mind that this is not your typical neighborhood park; it's 2.5 miles long, .5 mile wide and covers 843 acres of wooded and landscaped grounds with gardens, lakes, ice-skating rinks, a 1908 hand-crafted carousel, a zoo and plenty of room for a myriad of outdoor sports. Have a picnic under the shade of one of 20,000 trees, sit on one of 9,000 benches, walk or jog on 58 miles of paths or ride a bike on the 6-mile roadway inside the park.

There are five visitor centers within the park and, most importantly, they all have maps. The Dairy Visitor Center & Gift Shop (mid-park at 65th Street) is housed in a picturesque, beautifully restored Victorian cottage that once served as a 19th-century refreshment center. Belvedere Castle (mid-park at 79th Street), a Victorian folly created by Calvert Vaux in 1869, was intended as a lookout to the reservoir to the north (now the Great Lawn) and the Ramble to the south. Visitors can tour inside the miniature castle or borrow discovery kits for exploring the natural areas around the castle. The Chess & Checkers House (mid-park at 64th Street) features a pergola and game tables where visitors are welcome to borrow pieces to play. The Charles A. Dana Discovery Center (at 110th Street between Fifth and Lenox aves.) is home to the park's catch-and-release fishing program, outdoor concerts and family programs. Columbus Circle Information Kiosk (Central Park South and Central Park West) is near Merchant's Gate and has a shaded sitting area.

For those wondering how to traverse Central Park's many miles of paths, there are a bevy of tour options. Perhaps the most iconic is the horse-drawn carriage replete with festooned horses, drivers with top hats and the customary plaid lap-blanket. The carriages can be found on Central Park South between Fifth and Sixth avenues. Pedicabs are another option for those who want to let someone else do the work; the tricycles are powered by inordinately cheerful drivers pedaling up to three adults or two adults and two children in a canopy-covered rickshaw. Find pedicab stands throughout the park, including at Columbus Circle, mid-park at Cherry Hill near the Bethesda Fountain, Central Park West and W. 72nd Street. There is no standard pricing for pedicabs and tours of the park can vary; passengers should be sure to get an exact quote from the driver before setting out.

Dozens of different free, guided walking tours are offered through the Central Park Conservatory. Tours last from one to two hours, take place year-round rain or shine, and depart from the Dairy Visitor Center & Gift Shop (phone (212) 794-6564 for tour schedules); Belvedere Castle (phone (212) 772-0288); and Charles A. Dana Discovery Center (phone (347) 443-0656). Guided tour schedules and maps for self-guided tours can be picked up from any of the visitor centers and are available on the park's website.

Scattered throughout the park near some of the park's best loved locales are 40 small green signs for the Central Park Conservancy’s audio guide. Visitors can call (646) 862-0997 and type in an extension for each location to hear recordings by dozens of celebrities including Kelly Ripa, Glenn Close, Jerry Seinfeld and Jimmy Fallon that offer a mix of trivia, memories and history (both personal and general) related to that specific site.

Summer months brings tourists and natives alike to “the city's backyard.” Recreation participants abound, but none is more ubiquitous than the city jogger, whose favorite route is The Reservoir running track, aka the Stephanie and Fred Shuman Running Track. This 1.58-mile path offers runners some of the best skyline views in the park and an occasional celebrity sighting. The Reservoir itself (mid-park from 85th-96th streets) is 40 feet deep and holds a billion gallons of water. It was built in the 1860s as a temporary water supply for the city and remained so until 1993.

Visitors can rent bikes at various locations including Merchants' Gate Plaza (Central Park South and Central Park West) and Grand Army Plaza (Fifth Avenue and 60th Street). Take a rowboat out on The Lake from April through October. Venetian gondola tours are also available; they hold up to six people and can be reserved at the Loeb Boathouse (phone (212) 517-2233).

Central Park has 26 baseball fields located in the Great Lawn, North Meadow and Heckscher Ballfields; permits are required for use of ballfields (phone (212) 408-0226). Basketball courts are open 10-8 daily at the North Meadow Recreation Center (basketballs, baseballs, baseball bats, jump ropes and Frisbees are available with a photo ID). The lawn bowling and croquet season runs from May through November and fields are located north of the Sheep Meadow (west side at 69th Street). Permits are required for lawn bowling and croquet and can be obtained in Room 1 of the Arsenal at Fifth Avenue and 64th Street. The Central Park Tennis Center (west side at 94th Street) has 30 outdoor tennis courts and is open from 6:30 a.m. to dusk, April through November (asphalt courts remain open all year). All players must have either a seasonal or single-play permit, available at the Arsenal or at the Tennis Center.

Those looking for relief from New York's hazy, hot and humid summers can find it at Harlem Meer Center (mid-park at 106th Street). Admission is free but swimmers must have a swimsuit, a lock and a towel; the pool is open daily 11-3 and 4-7, July 1-Labor Day. Note: At time of publication, Harlem Meer Center was closed as part of a restoration project and is scheduled to open in 2024. For those who would rather be on the water than in it, radio- and wind-powered model boats can be rented at the Conservatory Water (east side from 72nd-75th streets) April through October (see attraction listing).

Winter in the park is as picturesque as it gets and recreational activities are numerous. Ice skating on Wollman Rink (east side at 62nd Street) or Harlem Meer Center (mid-park at 106th Street) is a winter tradition for New Yorkers and tourists. Note: At time of publication, Harlem Meer Center was closed as part of a restoration project and is scheduled to open in 2024. The outdoor rinks are open daily November through March; skate rentals and lockers are available. Cross-country skiing is allowed when there is a base of snow of at least six inches deep; the best places to feel the swoosh and glide are the Sheep Meadow and the Great Lawn.

Those with kids in tow should take note of the park's family-oriented offerings. The 1908 hand-crafted Carousel (mid-park at 64th Street) is open daily 10-6, April through October; Saturday and Sunday 10-4:30, November through May (weather permitting). Other artistic darlings include the Balto statue (east side at 67th Street) and the Alice in Wonderland and Hans Christian Andersen statues near the Conservatory Water (east side from 72nd to75th streets). A story-telling hour is held at the Andersen statue on Saturday at 11, June through September.

Another popular stop with kids and young teens is the Central Park Zoo (east side at 64th Street) featuring wildlife in naturalistic surroundings and a 4-D theater, sea lion feedings, and the Tisch Children's Zoo (see attraction listing). For kids who like to pull strings, the Swedish Cottage Marionette Theatre (west side at 81st Street) produces marionette shows based on children's classics (see attraction listing).

When kids are bored of walking and parents need to take a break, it's important to remember that Central Park is home to 21 playgrounds, open from 8 a.m. to dusk. Children's favorites include Heckscher Playground (mid-park from 61st to 63rd streets) with its toddler area, sprinklers, swings and a raised concrete walkway resembling a castle just under looming natural rock formations. Ancient Playground (east side at 85th Street, just north of the Metropolitan Museum of Art) includes climbing pyramids, an obelisk and a sundial inspired by the museum's collection of Egyptian art. Billy Johnson Playground (east side at 67th Street) features a 45-foot granite slide set into a hill that kids will never tire of. Robert Bendheim Playground (east side at 100th Street) was designed to be accessible to children with and without disabilities.

Home to many a wedding proposal, film shoots and lonely saxophone player, Bethesda Terrace (mid-park at 72nd Street) is considered the heart of Central Park. It consists of an upper and lower terrace connected by two grand staircases, a mall leading up to it and the majestic Bethesda Fountain. The carvings represent the four seasons and, on the side facing the Mall, the times of day.

The Great Lawn (mid-park from 79th to 85th streets) is a green 55-acre area at the geographical center of Central Park. It is one of the most famous lawns in the world and one of the best places for people-watching.

“Meer” is Dutch for “lake,” and at Harlem Meer (east side from 106th to 110th streets) catch-and-release fishing is a favorite summertime occupation along its banks. The waterside plaza is the site for Sunday afternoon's Harlem Meer Performance Festival featuring local, established and emerging jazz, Latin, gospel, blues and world music artists from mid-June to the first week of September.

Iphigene's Walk (mid-park from 77th-79th sts.) is a lush walk cutting through the northeast edge of the Ramble. The path has a particularly seasonal appeal with blooming deep pink crabapple trees embellishing its eastern edge.

Naumburg Bandshell (mid-park between 70th-71st sts.) is a neoclassical bandshell that was the site of a Martin Luther King Jr. speech and John Lennon's eulogy. Today the Bandshell hosts artists from a wide range of genres.

Sheep Meadow (west side from 66th to 69th streets) is the location for anyone wanting to sunbathe, picnic, fly kites or just relax and take in the pastoral expanse.

Cleopatra's Needle, an Egyptian obelisk at E. 81st Street, was presented to the United States by the Khedive of Egypt in 1881. The 5.3-acre Strawberry Fields (see attraction listing) honors John Lennon (west side between 71st and 74th Streets).

The Mall and Literary Walk (mid-park from 66th-72nd streets) is framed by American elm trees forming a canopy above the “Promenade.” The southern end of the Mall is known as Literary Walk and features sculptures of Robert Burns, Sir Walter Scott and William Shakespeare. For those looking for something a little less erudite, the Central Park Dance Skaters and their ebullient DJs are usually rolling and weaving on most weekends just west of the Mall.

Central Park holds a myriad of annual events; the Delacorte Theater (mid-park at 80th Street) is the summer home of the Public Theater and host to Shakespeare in the Park and other classic works. Tickets are free for the open-air amphitheater and are available on a first-come, first-served basis; plays run June through August. The Central Park Conservancy Film Festival is held outdoors just north of Sheep Meadow and south of 72nd Street in late August.

SummerStage, New York's premier performing arts festival, is a summer-long act running June through August. Eclectic performances, free to the public, can include dance, spoken word and music; events are held at Rumsey Playfield (east side at 72nd Street off Fifth Avenue). The playfield also hosts Good Morning America's Summer Concert Series on Friday mornings, June through August. Viewers should arrive at Rumsey Playfield via the 69th street entrance on Fifth Avenue at 6 a.m. All concerts are free and take place live during "Good Morning America." Other free outdoor summer concerts include those presented by the Metropolitan Opera (phone (212) 362-6000); the New York Philharmonic (phone (212) 875-5656); and Naumburg Orchestral Concerts (phone (212) 501-7809).