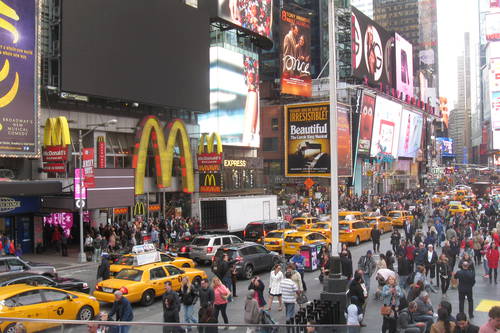 AAA/Greg Weekes
1 Photo
AAA Editor Notes
Times Square is at the crossroads of Broadway and Seventh Ave. On December 31, 1904 The New York Times celebrated the opening of its new building on the traffic triangle between 42nd and 43rd streets with a public fireworks display; four months later, the three-sided Longacre Square was officially renamed Times Square. With the commencement of the annual New Year's Eve ball drop in 1907 and the installation of the “zipper” news bulletin board in 1928, Times Square became America's gathering place during significant events of the 20th century.

Home to Broadway theaters, television studios, financial institutions, museums and shops ranging from the flagship H&M to M&M World, the Times Square district is the only place in the city where businesses are required to advertise in bright lights.