More Attractions in Salem, OR 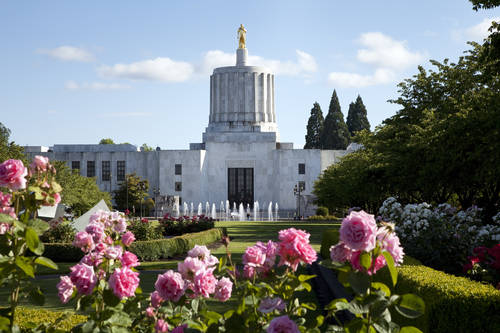 KingWu/iStockphoto.com
1 Photo
AAA Editor Notes
State Capitol State Park is bounded by State, Capitol, Winter and D sts. The park is a landscaped, 16-block complex of state government buildings and parks on the eastern edge of downtown Salem. Wilson Park, west of the Capitol, contains a fountain, gazebo, gardens and a variety of native and ornamental trees, including a “moon tree,” a Douglas fir grown from seed taken to the moon aboard Apollo 14 in 1971. The Oregon World War II Memorial, a 33-foot-tall obelisk in a plaza bordered by a black granite memorial wall, stands in Wilson Park at the corner of Court and Cottage streets.

Capitol Park, east of the statehouse, features several statues honoring early Oregonians. The Circuit Rider honors pioneer preachers who visited remote communities. Other statues commemorate Dr. John McLoughlin, known as the “Father of Oregon Country,” and Rev. Jason Lee, the pioneer Methodist missionary who founded Willamette University, which is just across State Street from the Capitol. Nearby, fragments of brick columns can be seen; they once supported the main entrance to the former Capitol, destroyed by fire in 1935.

The mall's promenade, lined by state government buildings sheathed in white marble, extends 2 blocks north from the Capitol. The plaza features fountains, Japanese cherry trees and a rose garden. An Avenue of Flags displays the flags of all 50 states, and the walkways contain stepping stones representing each of Oregon's 36 counties. A brochure outlining a walking tour of the mall is available from the Capitol's information center.