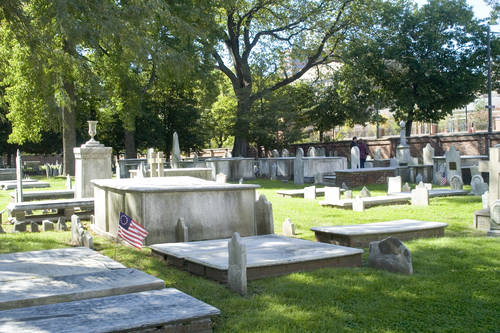 AAA/Denise Campbell
1 Photo
AAA Editor Notes
Christ Church (Episcopal), on 2nd St. between Market and Arch sts. within Independence National Historical Park, was the house of worship of several signers of the Declaration of Independence. Brass plaques mark the pews once occupied by Benjamin Franklin, Betsy Ross and George Washington. The 1744 structure typifies early Georgian architecture. It has one of the oldest Palladian windows in North America and contains the font from which William Penn was baptized in 1644 in London.

Christ Church Burial Ground, 5th and Arch streets, contains the graves of Benjamin Franklin and four other signers of the Declaration of Independence. Guided tours of the church and of the burial ground are offered.