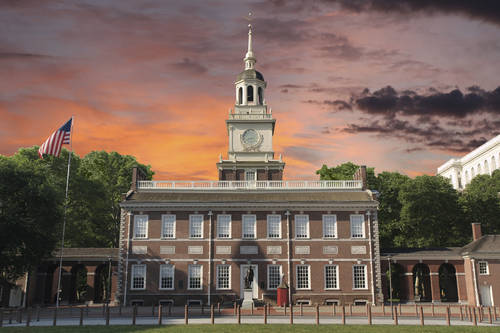 trekandshoot/iStockphoto.com
1 Photo
AAA Editor Notes
Independence Hall is between 5th and 6th sts. on Chestnut St. on Independence Square within Independence National Historical Park. Within this graceful 1732 brick building, built as the Pennsylvania State House, the Second Continental Congress voted to break with England, the Declaration of Independence and Constitution were signed, and George Washington accepted the role of commander in chief of the Colonial armies. The Assembly Room has been restored to look as it did when used by the founding fathers 1775-87. It contains the original Rising Sun chair that Washington occupied during the drafting of the Constitution.

Across the hallway is the restored Pennsylvania Supreme Court Chamber. Upstairs, the Governor's Council Chamber, Long Room and Committee Room have been restored and furnished in period. The west wing's Great Essentials Exhibit features original rare, printed copies of the Declaration of Independence, the Articles of Confederation and the Constitution as well as the silver inkstand that is believed to have been used by the signers of the Declaration of Independence and the Constitution.

Note: Access requires visitors to pass through security screening. Admission is by guided tour only (except for the west wing). Tickets are issued for specific times and are available at the Independence Visitor Center at 6th and Market streets. For a small handling fee, the National Park Reservation Service will arrange advance tickets (tickets are not necessary Jan.-Feb.).