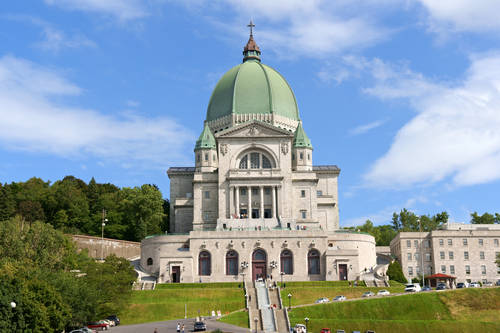 aladin66/iStockphoto.com
1 Photo
AAA Editor Notes
Saint Joseph's Oratory of Mount Royal (L'Oratoire St-Joseph du Mont-Royal), 3800 ch. Queen Mary (M: Côte-des-Neiges or Snowdon), is one of the world's largest basilicas and one of the city's most important religious shrines. It was begun in 1904 and the basilica was completed in 1967. The oratory was the dream of Holy Cross Brother André Bessette, who had a simple wooden chapel on the site. During his service there from 1904 (when he was 59 years old) until his death in 1937, Brother André was known as a healer, invoking cures for hundreds through prayer to his patron saint, St. Joseph.

Brother André was canonized in 2010; his tomb is beside the Crypt Church. Other highlights include the original chapel, built 1904-10, and a French-made, 56-bell carillon.