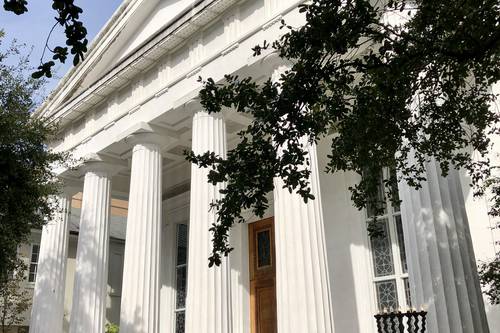 Courtesy of Wikimedia Commons
1 Photo
AAA Editor Notes
Kahal Kadosh Beth Elohim is at 90 Hasell St. Built by a congregation organized in 1749, the 1840 Greek Revival building is said to be the nation's oldest synagogue in continuous use and might be the first built by a practicing Jewish carpenter and builder in the Americas. The congregation's introduction in 1824 of instrumental music during a worship service made it a pioneer of Reform Judaism in the United States. A museum relates the history of the synagogue and Reform Judaism in the South.

The temple's records are kept at the Jewish Heritage Collection at 205 Calhoun St. in Addlestone Library on the College of Charleston campus. This research facility for Jewish history in South Carolina is open Mon.-Fri. 9-5; phone (843) 953-8016.