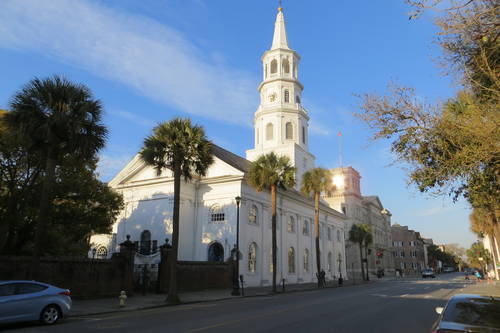 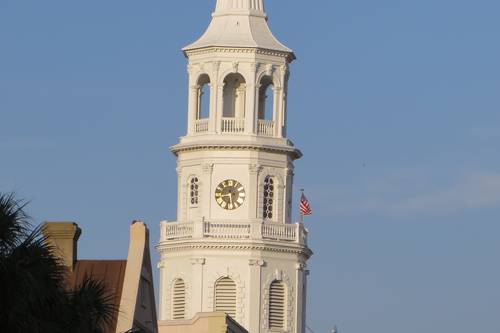 AAA/Inspector 43
2 Photos
AAA Editor Notes
St. Michael's Church is at 71 Broad St. at jct. Meeting St. Begun in 1751, St. Michael's was the second Anglican church in Charleston. Designed after the 1720s St. Martin-in-the-Fields Church in London, it is considered a notable architectural achievement. Adorned with a Palladian Doric portico, the steeple rises 186 feet above the street. The clock in the tower has marked the time since 1764, but the minute hand wasn't added until 1849. President George Washington attended the church on May 8, 1791, and Gen. Robert E. Lee visited during the early 1860s.

The richly ornamental interior includes box pews and the original pulpit. The church office occupies the home once owned by William Ward Burrows, a first commandant of the U.S. Marine Corps, and later by Thomas Hall, the city's first postmaster. An old cemetery on the grounds contains the graves of John Rutledge and Gen. Charles Cotesworth Pinckney, both signers of the Constitution. The only parts of the church not open to visitors is the balcony and the steeple.

Note: Phone ahead for guided tours by appointment.