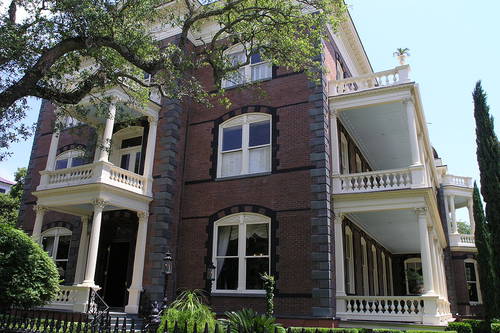 Wikimedia Commons/Daniel Mayer
1 Photo
AAA Editor Notes
Williams Mansion is 1 blk. n. of The Battery at 16 Meeting St. The 35-room Italianate house was built in 1876 for businessman George Walton Williams. After his death in 1903, it was turned over to his daughter Sarah and her husband, Patrick Calhoun (grandson of Vice President John C. Calhoun), for whom the mansion was named until recently. The house has been used in filming various productions, including “The Notebook” and the television miniseries “North and South,” which was based on author John Jakes' Civil War trilogy.

Thirty-minute tours include two of the three floors; visitors can view the rooms from the wide hallways as the guide describes their history and furnishings. The vast collections of antiques belong to the current owner and are not original to the house but reflect the type of furnishings found in many Victorian mansions, especially those of the Gilded Age. There is American, Asian and European furniture from the 17th- through 19th centuries as well as international pieces of art from the 16th- through 19th centuries. Visitors can tour the Japanese koi and English gardens before and after the house tour.

A 90-minute grand tour, which includes the entire house, is available by appointment.

Note: At time of publication the mansion was closed with no scheduled opening date; phone ahead for updates.