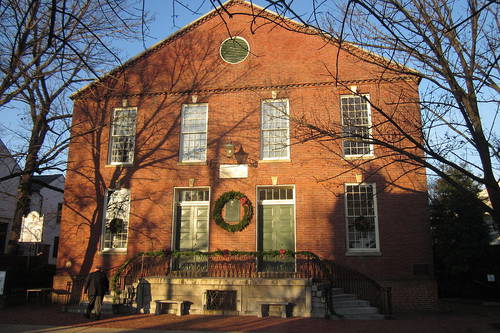 Wikimedia Commons/Doug Kerr
1 Photo
AAA Editor Notes
Old Presbyterian Meeting House is at 321 S. Fairfax St. between Duke and Wolfe sts. Established in 1772, the meeting house became a gathering place for patriots during the Revolutionary War and was the site of George Washington's funeral sermons in December 1799. During the Civil War it was used briefly as a hospital.

The grave of social and political figure John Carlyle and the Tomb of the Unknown Revolutionary War Soldier are in the churchyard. The old-fashioned gate pews of this still-active church have been retained. The keys to the sanctuary are available at the church office.