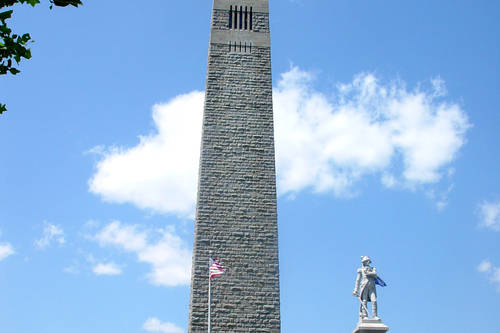 The British, running low on supplies, were attempting to reach the depot in Bennington where U.S. military provisions and food were stocked. The Americans met the redcoats before they could reach the storage site, however, and the Battle of Bennington, which ensued, was actually fought about 5 miles west at Walloomsac, N.Y. The loss to the Americans (both in manpower and the failure to restock their supplies) proved to be a factor in Burgoyne's surrender following the Battle of Saratoga in October, said to be a major turning point in the war.

The stone obelisk, when completed in 1889, was the tallest battle monument in the world; at 306 feet, it is still the tallest structure in Vermont. The monument was not dedicated, though, until 1891, with President Benjamin Harrison in attendance.

From the upper lookout chamber, reached by elevator or on occasion by walking the 412 steps, three states (Vermont, New York and Massachusetts) can be seen. A diorama and exhibits illustrate the battle, and an iron kettle belonging to General Burgoyne is displayed. A granite monument to Seth Warner who, with the Green Mountain Boys, helped win the battle, a statue of Stark and other monuments surround the attraction. Events are scheduled throughout the season.