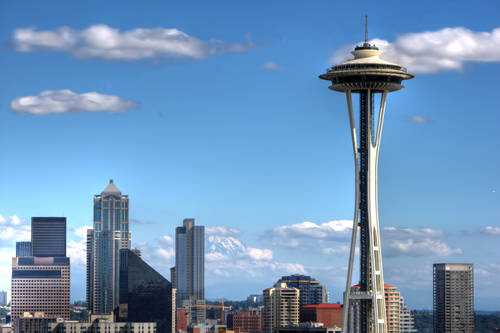 rhyman007/iStockphoto.com
1 Photo
AAA Editor Notes
Seattle Center is between Denny Way and Mercer St. and 1st and 5th aves. This was the site of the Century 21 Exposition, better known as the 1962 World's Fair. The fair was an exciting window to the future, with exhibit areas like The World of Tomorrow, and also gave Seattle one of its most beloved landmarks, the Space Needle.

After the fair's 6-month run ended the 74-acre grounds remained, along with many of the pavilion buildings and the Seattle Center Monorail, which still runs between stations next to the Space Needle and at Westlake Center Mall, downtown at 5th Avenue and Pine Street. Of course the passage of time has mellowed once-radical ideas introduced by the fair's exhibits, but Seattle Center has persevered as a public meeting place of sorts—on a very large scale.

Several of the city's popular attractions are conveniently gathered here. There are plenty of open spaces for picnics, and landscaped areas centered around plazas, fountains and sculptures offer numerous opportunities for relaxing. Gardens, water features and sculptures enhance the outdoor pathways.

This also is Seattle's No. 1 festival site; Bumbershoot, Bite of Seattle, the Northwest Folklife Festival, Seattle PrideFest and the Seattle International Film Festival are just five of the many popular events held here each year.