About KennewickThe region where Kennewick (which means “winter paradise” in the Yakama Nation tongue) now stands was nothing but arid land with a carpet of bunch grass until the late 1800s, when the first of a series of irrigation projects began to convert sagebrush country into farmland. In 1957 the Kennewick Highland irrigation project was completed; it now supplies water to more than 20,000 acres that support crops of alfalfa, corn and beans. Reinforced by the huge hydroelectric dams harnessing the lower bend of the Columbia River, Kennewick's economy also is supported by chemical and agricultural processing.

Kennewick, Pasco and Richland form the urban Tri-Cities area. Despite the desertlike climate (annual rainfall is less than 8 inches), water is a major feature of the landscape. The Columbia—here three-quarters of a mile wide—flows from north to south. Between Kennewick and Richland it receives the Yakima River. And just downstream from Pasco the Snake, mightiest of the tributaries, joins its parent stream.

It's no surprise, then, that Kennewick is the departure point for various scenic and recreational cruises. Columbia Park extends 4.5 miles along the river. There are several access points off SR 240. Facilities include an aquatic playground, playing fields, a miniature railway, a golf course and a fishing pond. Columbia Park's Regional Veterans Memorial features a 40-foot-high granite slab, said to be the tallest freestanding piece of granite in the U.S.

On the grounds of the Southridge Sports and Events Complex, off US 395 at 2901 Southridge Blvd., is a 9/11 Memorial consisting of a piece of steel that fell more than 1,000 feet from the upper levels of one of the World Trade Center towers on September 11, 2001. Nearby is the Gesa Carousel of Dreams, a restored 1910 Charles Carmel carousel with 45 colorful, hand-carved horses. The carousel was originally located in St. Joseph, Mich., and is set in a glass and wooden structure for year-round operation; phone (509) 378-3257. 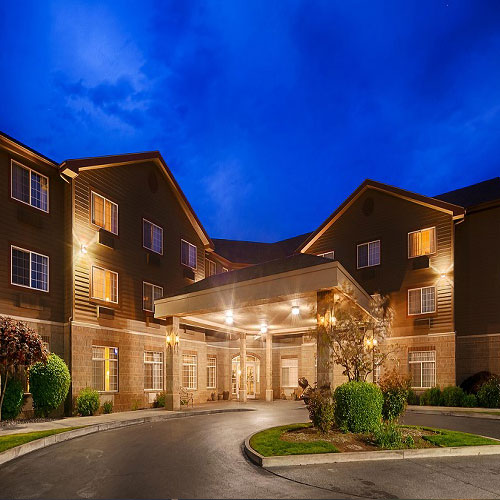