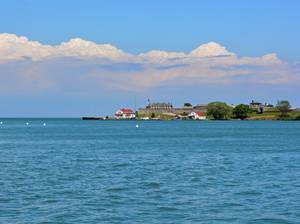 About LewistonAt the confluence of the Clearwater and Snake rivers, Lewiston is on a site where Meriwether Lewis and William Clark camped in 1805 and again in 1806. Following the discovery of gold nearby, the settlement became a supply point for mining camps and, subsequently, the state's first territorial capital 1863-65.

Large quantities of grain and other cargo are shipped from Lewiston, known as “Idaho's Seaport,” by barge 465 miles down the Snake and Columbia rivers to the Pacific. Boats reach the port by passing through locks at eight dams.

In April the city celebrates the arrival of spring with the Dogwood Festival of the Lewis-Clark Valley. Lewiston lies on an especially scenic section of US 95 that extends north to Plummer and south to Banks. North of the city US 95 climbs 2,000 feet to the top of Lewiston Hill, where a viewpoint overlooks the valley. The original road up the hill, known as the Spiral Highway for its 64 curves, opened in 1917. The old road is still open but was replaced in 1979 by the long, easier grade of the new alignment.

ShoppingLewiston Center Mall, 1 mile south of US 12 via 18th or 21st streets, features JCPenney and other retailers.