More About
Owen Sound, ON
HotelsAttractionsCampgrounds

About Owen SoundKnown to the Ojibway as the “beautiful valley,” Owen Sound lies in the Sydenham River Valley and is flanked on both sides by the cliffs of the Niagara Escarpment. Some 30 fern varieties and 40 species of orchids are found in the area. Its natural harbor and location have made Owen Sound a center for vacationers visiting Georgian Bay, the nearby Blue Mountains and Bruce Peninsula.

Owen Sound is the birthplace of two notable Canadians—Tom Thomson, an innovative Canadian landscape artist who was the forerunner of the Group of Seven, and Billy Bishop, a World War I ace who shot down 72 enemy planes.

The Mill Dam, off 2nd Avenue W. at 6th Street, is one of Ontario's first fish ladders. In April and May visitors can watch rainbow and brown trout swim upstream to spawn; chinook salmon can be seen migrating from August to October.

Harrison Park, on 2nd Avenue, embraces 45 hectares (114 acres) of rolling meadows and hardwood forests along the Sydenham River as well as a large bird sanctuary.

Farther upriver is the Inglis Falls Conservation Area, one of 10 principal parks along the Bruce Trail. Besides hiking and cross-country skiing opportunities, the park's major highlight is an 18-metre (59-ft.) waterfall created as the Sydenham River cascades over the Niagara Escarpment. Jones Falls, also on the Bruce Trail in the Pottawatomi Conservation Area, flows 12 metres (39 feet) over the Niagara Escarpment.

North of town on CR 26 is Bruce's Cave Conservation Area, home to caves that illustrate the ancient weathering processes and the magnitude of post-glacial lake levels. The area is open for summer and winter recreation.

Among the many special events offered throughout the year is the Summerfolk Festival in August, featuring contemporary and traditional folk and blues performers from around the world. From mid-November to early January enjoy more than 200 colorful light displays in downtown along the Sydenham River and in Harrison Park during the annual Festival of Northern Lights. 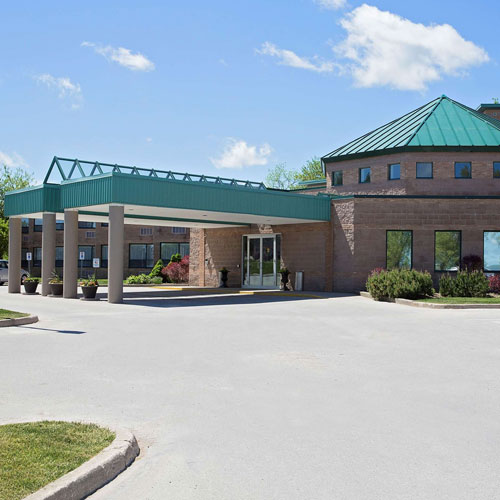 Best Western Inn On The Bay