About WallaceThe center of a great lead- and silver-mining region, Wallace is at the junction of four major canyons, three of which lead to important active mining districts. This region claims several of the world's largest and deepest silver mines; some of the mines founded in the late 1800s have 200 miles of tunnels.

Among the historic buildings still standing in town are the railroad depot with its original Chinese bricks; the Smokehouse Building, which was once the courthouse; and the Rossi Building with its Queen Anne-style turret. The turret is a characteristic architectural feature seen on most of the corner buildings throughout the historic district.

Pulaski Trail, 1 mile south, features interpretive signs describing the 1910 fire that consumed 3 million acres and is said to be one of the largest fires in U.S. history.

At the east end of Wallace, SR 4 leads north from I-90 exit 62 into Burke Canyon, one of the district’s historic mining areas. The 7-mile road passes tailings, abandoned mines, derelict buildings and the once bustling towns of Gem and Burke. The latter town, in a narrow canyon, was renowned for the 150-room Tiger Hotel, which was not only built over a creek, but also had a rail line tunneling through its center and a street running under its west end; the hotel was razed in 1964.

Area back roads attract all-terrain vehicle enthusiasts in summer and snowmobilers in winter.

Self-guiding ToursA brochure describing driving and walking tours of the mining and historic districts is available at the visitor center. 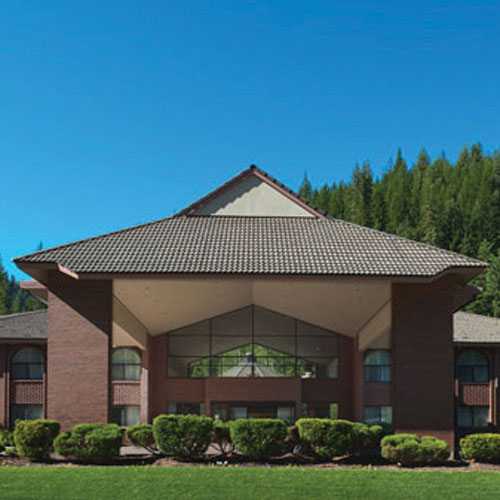