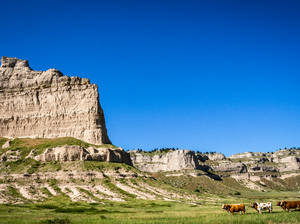 About OgallalaNamed for the Oglala Tribe of the Dakota Sioux, Ogallala became a railroad town and cattle-shipping point after the completion of the Union Pacific Railroad in 1867. Most of the cattle were herded up from Texas by cowboys anxious to let off steam after the long, hard drive, and Ogallala soon became a rowdy and often violent cow town known as the “Gomorrah of the Plains.”

Fights were frequent and often unprovoked. Legend has it that one man was killed because he insulted two strangers for eating baked beans. Many of the unfortunates were buried hastily in Boot Hill Cemetery at 10th Street and Parkhill Drive. Front Street, a replicated Old West town, re-creates the era with cowboy shoot-outs, a dance hall musical revue, a restaurant and shops; for information phone (308) 284-6000.

The Lincoln Highway passes through town, and a visitor center in the restored Spruce Street Station offers information and displays about the highway's past. Ogallala also is the southeastern terminus of Nebraska's first Scenic and Historical Byway, US 26/SR 92. The Western Trails Scenic and Historic Byway runs westward 143 miles and follows the North Platte River past Chimney Rock National Historic Site to Scottsbluff and the Wyoming border.

Lake McConaughy, the state's largest, and Lake Ogallala are both just north of town and provide recreational opportunities.

Things to Do Mansion on the Hill