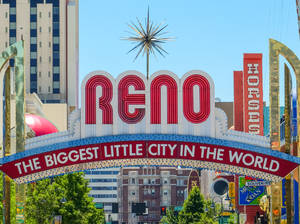 About RenoWhen most people hear the words “gambling” and “Nevada,” they automatically think of Las Vegas. But if you grew up in the 1960s and '70s—and especially if you lived in northern California—“The Biggest Little City in the World” was where it was at.

Back then Nevada meant casinos, craps tables and big-name entertainment. It was where adults went for a little bit of naughty fun since, except for horse racing and poker, gambling wasn't legally allowed anywhere in California. Even the 4-hour drive to get to Reno was an adventure, on a highway that crossed the rugged Sierra Nevada mountain range. Once travelers reached the “Welcome to Nevada” road sign it was a different world; even the grocery stores had slot machines.

During Reno's heyday more than 3 decades ago, big hotel-casinos like Harrah's and Club Cal-Neva lined Virginia Street, downtown's main drag. The Mapes Hotel, which stood on the north bank of the Truckee River, was one of the state's first lavish hotel-casino complexes.

Then a period of decline set in, fueled mainly by two related factors: the phenomenal success story of Las Vegas, and the increasing popularity of northern California casinos operating on Native American lands. The Mapes closed in 1982 and was demolished in 2000. Downtown still has shuttered stores and hotels, but that doesn't mean Reno's dead. Garish casino signs advertise deals like steak and eggs for $4.99. And the Reno Arch—otherwise known as the sign touting “The Biggest Little City in the World”—still arches proudly (and blazes with neon after dark) over Virginia Street.

These days the city is all about repurposing. Former hotel-casino buildings have been converted to condos. Fitzgeralds, an old-school casino that was a longtime downtown fixture before closing in 2008 has metamorphosed into the Whitney Peak Hotel, a multiuse facility that includes a 1,000-person capacity concert hall. It also encompasses BaseCamp, a bouldering park that boasts the world's tallest competitive rock climbing wall. The 164-foot outdoor structure scales the building's east face and looks down on the Reno Arch; phone (775) 398-5400.

One of the more visible spruce-up efforts is the revitalization of the area along the Truckee River. The river's narrow, swift-flowing waters run right through the middle of downtown and are the centerpiece of Wingfield Park. The landscaped walkways running along both sides of the riverbank are a nice place to stroll.

Kayakers and tubers navigate the Truckee's series of man-made rapids. The park also is the starting point of the Reno-Tahoe Odyssey, a relay race that follows a 178-mile course. Teams of 12 runners negotiate the river on a route that travels through the Sierra Nevada and along a portion of Lake Tahoe shoreline before circling through the northern Nevada high desert back to the race's starting point. The 2-day event takes place at the end of May or early June.

Cinco de Mayo Festival is celebrated in late April or early May at the Grand Sierra Resort. For 10 days in mid-June, the likes of barrel racing, bull riding and steer wrestling at the Reno Rodeo draw huge crowds. One of the rodeo's highlights is the Mutton Bustin' competition, in which kids who want to be cowboys get a gentler taste of what it's like to be on top of a buckin' bronc by riding sheep. It all happens at the Reno-Sparks Livestock Events Center, 1350 N. Wells Ave. Among Reno's other annual events is Hot August Nights, which offers classic car cruises and a '50s-style sock hop. September brings the excitement of the Great Reno Balloon Race, one of the largest hot air balloon rallies in the country, and the National Championship Air Races, which takes place at the Reno-Stead Airport.

Greater Nevada Field, 250 Evans St. at the east end of downtown, opened in 2009. The home stadium of the Triple-A Reno Aces seats just over 9,000 fans. Home games are played from early April through late August or early September; for schedule and ticket information phone (775) 334-7000.

Reno's also big on bowling, and major tournaments take place here regularly. The National Bowling Stadium, downtown at 300 N. Center St., is much more than a tenpin alley, although it has 78 championship lanes as well as a 440-foot video screen that projects state-of-the-art scoring graphics. The bronze sculpture of a family on their way to the bowling alley, just inside the front lobby entrance, makes for an amusing photo op. Phone (775) 335-8800.

Hotel-casino complexes like Harrah's and three interconnected properties—Circus Circus, the Eldorado and the Silver Legacy—ably carry on Reno's gambling tradition. There's also plenty of action outside the downtown core, namely at the Peppermill, the Atlantis and the Grand Sierra.

And for a taste of old-school Reno, you must make the pilgrimage to The Nugget, downtown at 233 N. Virginia St. You'll have to brave the secondhand smoke that pervades this small, seen-better-days casino on your way to The Little Nugget diner, the original home of the Awful Awful burger (as in “awful good” and “awful cheap”). The char-grilled patty is tucked into an onion bun, garnished with lettuce, tomato, red onion and “secret sauce,” and presented atop a veritable mountain of fries. It's unpretentious yet satisfying, much like the city itself.

ShoppingDo your shopping thing at one of several area malls. Among the more than 100 stores at Meadowood Mall, at S. Virginia Street and S. McCarran Boulevard (exit 63 off US 395 South), are JCPenney, Sears and twin Macy's (one for men, one for women). There's also a large food court.

The Summit, 13925 S. Virginia St. at Mount Rose Highway (US 395 exit 57B), is an outdoor mall with anchor store Dillard's and popular retailers like JoS. A. Bank, Old Navy and Williams-Sonoma. A free shuttle and fire pits make shopping at this spread-out complex more comfortable during the chilly winter months.

Downtown's Riverwalk, along the Truckee River between Arlington Avenue and Lake Street, also is the location of Reno's budding arts district, where there are a handful of galleries and some eclectic boutiques. Reno eNVy, a block north of the river at 135 N. Sierra St., carries all sorts of customized T-shirts. La Terre Verte, 3 N. Virginia St., has environmentally friendly jewelry, gifts and home accessories.

Most of the casino complexes have at least a couple of shops. There's a mini-mall on the lower level of the Grand Sierra; among the 10 or so retailers is Pro Image, which offers a full line of team jerseys (including Reno Aces items), caps, clothing and novelties. The handful of tiny boutiques at the Peppermill includes Bella Bottega (ladies wear), Garbati-Bottega (menswear) and Regali Bottega (luxury gifts). Road hogs, meanwhile, will want to check out the motorcycle apparel and collectibles at Chester's Harley-Davidson in the Silver Legacy.

NightlifeReno after dark is all about the casinos. Big-name entertainers appear regularly at the Atlantis, the Silver Legacy, the Grand Sierra Resort & Casino and Nugget Casino Resort in nearby Sparks. At the showroom in the Eldorado Resort Casino, downtown at 345 N. Virginia St., shows range from Cirque du Soleil-type extravaganzas to traveling Broadway productions. Check the free weekly publication RN & R (Reno News and Review) for a schedule of current and upcoming events.

The casinos also offer no shortage of karaoke contests, country hoedowns and theme nights. By day The Beach, at the Grand Sierra, is a happening poolside party complete with a hot tub, real sand and a volleyball court, but in the evening the atmosphere turns more relaxed—drinks under the stars (weather permitting), ambient music and a distant backdrop of mountains. Head inside, where DJs provide entertainment at LEX Nightclub Thursday through Saturday nights; start the weekend early with Pre-Game Thursdays.

Nightclubs and lounges can't quite match the A-list hotness exemplified by the Vegas club scene, although they certainly try. EDGE Nightclub, at the Peppermill, has chic red and black decor and a dance floor where lasers pierce the sea of gyrating beautiful people. The club's outdoor terrace features an infinity pool and waterfall overlooking the rooftops of a faux Italian village. One of the more popular places in town to congregate is the Peppermill's Fireside Lounge, where plush individual booths are equipped with a state-of-the-art sound system and high-res plasma screens showing the latest music videos.

Kick back with a custom microbrew and a wood-fired pizza at Brew Brothers, in the Eldorado. DJ nights and live rock band karaoke provide the entertainment. Creative cocktails complement blues and jazz performances most Friday and Saturday nights at the Sapphire Lounge, in Harrah's.

Aura Ultra Lounge, in the Silver Legacy, is a sleek nightspot with an elliptical bar, bottle service and a VIP section for big spenders. Rum fanciers will want to partake of the libations at the Rum Bullions Island Bar, where you can down a flaming kava kava while indulging in a game of beer pong. And be sure to check out the casino's Mining Rig. This 120-foot-tall replica of a vintage mining machine stands beneath a 180-foot dome that simulates the Reno sky from sunrise to sunset. Hourly laser light shows with sound effects illuminate the hulking piece of machinery.

If you're not in the mood for a frenetic evening, settle in at the Ceol Irish Pub, 538 S. Virginia St. In addition to a large selection of Irish and Scotch whiskies and beers on tap, this friendly hangout has dart boards, trivia night on Thursdays and live music beginning at 9 p.m. on Fridays and Saturdays.

Things to Do Animal Ark 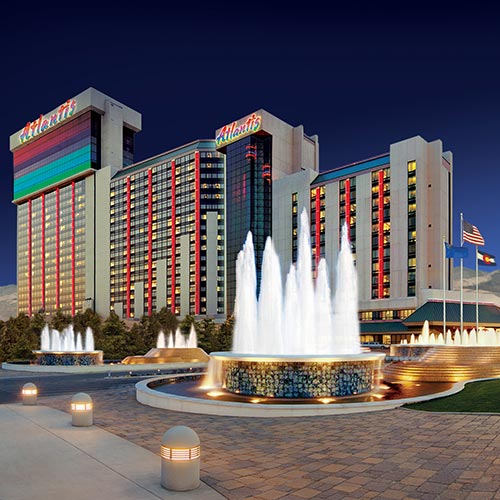 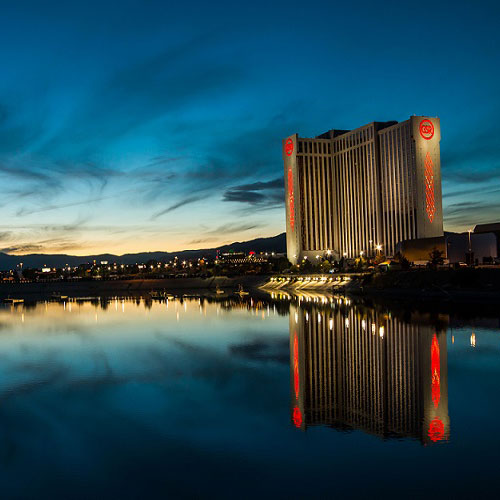 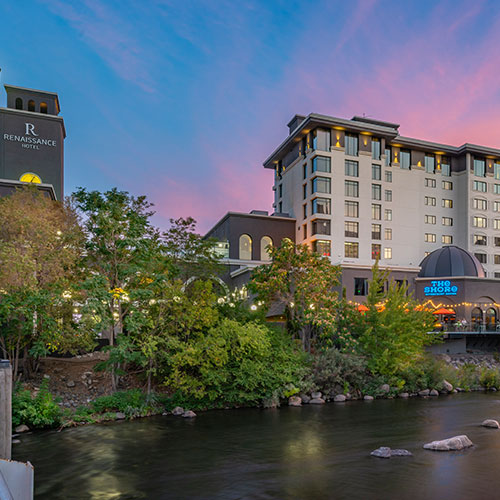