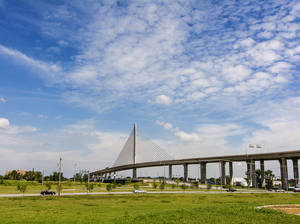 About ToledoA great industrial center, Toledo is one of the world's busiest freshwater ports, ranking third on the Great Lakes. The city's importance as a port stems from its location at the mouth of the Maumee River, the largest river flowing into the lakes. Its natural harbor has 35 miles of frontage. Pipelines for crude oil and gas terminate in Toledo, which is a major refining center. The city also is a large producer of glass.

Toledo occupies the site of old Fort Industry, which was built in 1794 and stood near the present Summit and Monroe streets. Fallen Timbers Monument, off SR 24 on Jerome Road, commemorates Gen. Anthony Wayne's 1794 defeat of the Native Americans, ending the bloody conflicts between the colonists and Native Americans.

As a result of his victory the Native Americans relinquished their rights to the Firelands, which comprised most of the Native American lands remaining in the vicinity. A consequence of the Toledo War of 1835, a vociferous boundary dispute with Michigan, gave Toledo to Ohio and granted Michigan its northern peninsula in compensation.

The Erie and Kalamazoo Railroad, completed in 1836, was the first American railroad built west of the Alleghenies. Toledo is now one of the nation's largest rail centers.

Toledo provides opportunities for outdoor recreation at its numerous public Metroparks of the Toledo Area. Promenade Park , a peaceful, landscaped setting along the Maumee River, is a favorite spot for viewing freighters and towboats. Oak Openings Preserve and Pearson Metropark are popular spots for watching wildlife, especially migrating birds.

A large collection of Victorian, Edwardian and Arts and Crafts homes in the Old West End provides a glimpse of architectural styles popular with wealthy industrialists in the late 19th- and early 20th centuries.

Self-guiding ToursBrochures and maps of a walking or driving tour of Old West End are available from the convention and visitors bureau. “Discover Downtown Toledo,” a guidebook with a walking tour highlighting the history and architecture of Toledo, is available for $5 at the Urban Affairs Center at the University of Toledo or at the Toledo Lucas County Public Library; for information phone (419) 530-3591 or (419) 259-5233.

National Museum of the Great Lakes

The Toledo Museum of Art