Shopping in Memphis Beale Street, with its raucous blues clubs and brilliant neon signs, is the heart of downtown Memphis’ tourist district and the place to go for Blues City T-shirts, Elvis refrigerator magnets and postcards of Graceland and the Peabody Memphis hotel. First-time visitors may be surprised at how compact the district is—it’s really just a couple blocks along Beale—so you could conceivably hit all the stores here within a single afternoon. But first on your list should be A. Schwab Dry Goods Store , 163 Beale St., a Beale Street institution since 1876.

Yes, they have Memphis souvenirs here. They also have just about anything else you can imagine: sun hats, calendars, clothing, coffee mugs, shampoo, collectible figurines and other knickknacks, Elvis biographies, toys, costume jewelry, candy, hardware, tools and even some voodoo paraphernalia. On the second floor, there’s a museum of sorts where you can handle antique items from the old-fashioned general store’s past, including ancient-looking adding machines, mysterious iron kitchen gadgets, photos, ledgers and high school yearbooks. Just 5 minutes of sensory overload here and you’ll know why the store’s motto is, “If you can’t find it at A. Schwab, you’re better off without it!”

Other shops on Beale worth noting: Tater Red’s , 153 Beale St., under the neon sign of a skull with hypnotic eyes wearing a top hat. This purveyor of lucky mojos and voodoo dolls will also sell you signed photographs of blues and rock ’n’ roll stars and an array of other music collectibles in addition to souvenirs emblazoned with the creepy cartoon image of the store’s death’s-head logo.

Strange Cargo , across the street at 172 Beale St., has novelty items, some of which are on the risqué side. For rock ’n’ roll merchandise, head to Hard Rock Cafe at 126 Beale.

Head a few blocks north to The Peabody Memphis historic hotel, 149 Union Ave., to check out the elegantly appointed lobby—famous for its twice daily duck parade to and from the centerpiece marble fountain—and the Peabody’s upscale gift shops and clothing stores. Foremost among these is another Memphis institution: Lansky Brothers , a men’s clothier since the late 1940s known for its famous clientele, which has included Elvis Presley as well as Johnny Cash, B.B. King, Isaac Hayes and Jerry Lee Lewis among others. Even if the prices are out of your range, the wall-mounted guitars autographed by various recording stars are worth a look in their own right.

Memphis’ historic commercial district along Main Street has struggled for a long time, and the smattering of clothing stores, art galleries and furniture stores does not exactly qualify the district as a shopping mecca, but getting around on foot is fairly easy. The street is closed to car traffic between Market Street and Union Avenue, and the early 20th-century buildings are well maintained and many have lovely, ornate facades.

One local favorite on Main Street is The Peanut Shoppe , a tiny store that’s hard to miss thanks to its 2-story-high “Peanuts” sign in the shape of an arrow pointing to its front door. The clerks here will explain the health benefits associated with each kind of nut (their selection is in no way limited to just peanuts), but for candy lovers, they also have an assortment of caramel- and chocolate-covered nuts as well. Munching on a bag of fresh roasted pecans while strolling through this pedestrian-friendly district is a great way to experience downtown Memphis once you’ve seen the sights along Beale Street.

Near The National Civil Rights Museum, you’ll find what’s become known in recent years as the South Main Street Arts District. Art galleries, trendy clothing boutiques featuring local designers and shops selling hand-crafted jewelry give the district a more urban, sophisticated vibe than you’ll experience elsewhere on Main Street. Coffee shops offer a quick cup of your favorite blend or if you have time for a sit-down meal, check out the Arcade Restaurant at the corner of Main and G.E. Patterson, Memphis’ oldest café, serving Southern home cooking since 1919.

If you venture outside of downtown, the Cooper-Young neighborhood in Midtown just a few miles east of the city center is known for antiques and secondhand clothing shops. Most of the antique stores are along Central Avenue between Cooper Street and East Parkway, a stretch of busy four-lane road not at all inviting to pedestrians.

Across Central Avenue and down a couple blocks toward East Parkway is Flashback , a large store specializing in 1950s-era housewares, knickknacks and furniture with a small area for vintage clothing off to one side. You’ll find several styles and decades represented here, but mid-century modern rules, so if you’re in the market for a kidney-shaped coffee table, a starburst wall clock or a chrome dinette, this is the place to go.

The epicenter of the Cooper-Young District—no surprise here—is the intersection of Cooper Street and Young Avenue a couple blocks south of Central. With trees, Victorian houses, narrower streets and crosswalks, this part of the district offers a more pedestrian-friendly environment, so you’ll find it easier (not to mention less hazardous) to browse among the locally owned shops selling used records, used books and funky clothing. The area’s also known for its coffee houses and trendy restaurants where you can pause to take stock of your purchases.

Just east of Midtown in the area known as East Memphis, two shopping centers worth noting face each other across busy Poplar Avenue. Oak Court Mall is anchored by Macy's and Dillard's, while Laurelwood Shopping Center features high-end clothing boutiques, art and interior design galleries, jewelry stores, a stationery shop and The Booksellers at Laurelwood , an independent book store.

If you continue east on Poplar Avenue, you’ll come across a retail landmark of sorts in the Memphis suburb of Germantown. The Shops of Saddle Creek , at Poplar and West Street/West Farmington Boulevard, was one of the first lifestyle shopping centers—typified by open-air plazas and immaculate landscaped areas connecting stores rather than enclosed corridors—when it was built in 1987. Burbling fountains and a thick tree canopy provide a lovely setting for the trendy, upscale shops that include Free People, J. Crew, Madewell, Lucky Brand Jeans and Talbots.

Tanger Outlets in Southaven, Miss., has more than 60 outlet stores. 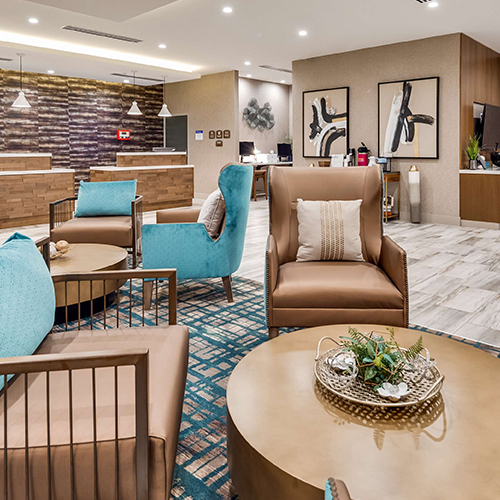