About Myrtle BeachEnvisioning a year-round golfing resort on 65,000 acres of undeveloped oceanfront property, John T. Woodside built a luxury hotel and had a Scottish golf course architect build the area’s first course in 1927. The Depression waylaid Woodside’s plans for further development, and he eventually sold out. The venerable golf club, later renamed Pine Lakes, is now the centerpiece of Myrtle Beach golfing.

More courses were added over the years, and by the late 1970s The Grand Strand had become a premiere golfing destination. Simultaneously, the beaches emerged as a favorite East Coast summertime getaway for middle-class Americans. Today, the area attracts vacationers from all over the country and annually courts thousands of returning Canadian visitors with its signature Canadian-American Days Festival in March.

Resort hotels and high-rise condominiums, palatial theaters, and a smorgasbord of pay-one-price buffet restaurants have replaced most of the mom-and-pop hotels, dance pavilions and greasy spoons of old Myrtle Beach. But you can still stroll on the boardwalk, chow down on a foot-long chili dog, buy kitschy souvenirs, feed coins to arcade games or dangle a line from a fishing pier in the historic district of Ocean Boulevard, where the iconic Pavilion Amusement Park lit up starry summer nights until its closure in 2006.

The 1.2-mile Boardwalk and Promenade is a staple of the area. It runs between the 2nd Avenue and 14th Avenue piers in three sections, affording numerous ocean views. The middle section lies among shops and attractions while the adjoining sections have a more laid-back feel.

With the Gulf Stream pacing only 40 miles offshore, the temperate climate is perfect for water-oriented recreation. A day at the beach might include parasailing, swimming, snorkeling, shelling, riding on a banana boat or doing nothing at all. You can fish in the surf (ages 16 and older will need a license) or from three piers (no license required), or maybe charter a deep-sea fishing boat.

Musical variety shows figure prominently in Myrtle Beach’s live entertainment offerings. Equally entertaining for all ages is Broadway at the Beach, a 350-acre village with shops, amusements, nightclubs, restaurants, attractions and a BigD–Large Format Digital Experience theater. Also in the complex is The Pavilion Park . Ten rides from Myrtle Beach's former Pavilion Amusement Park have been relocated here. A plaque at each ride details its history for curious fans. Carnival-style thrill rides and an arcade also are offered; phone (843) 839-0303.

Mealtime options are dizzying, with the highest concentration of establishments lining US 17 bypass, or Restaurant Row. While theater-size, pay-one-price seafood buffet restaurants are extremely popular, the discriminating diner can still find a cozy table for two, gourmet fare and a wine list behind less pretentious facades.

If you're around in mid-November you may want to consider attending the Dickens Christmas Show and Festivals at the Myrtle Beach Convention Center. Offerings include Victorian teas, tours, themed exhibits, performances, and vendors in period attire selling arts and crafts.

ShoppingOne-stop shopping, dining and entertainment complexes such as Broadway at the Beach on US 17 bypass can turn an ordinary shopping excursion into a daylong event. And every imaginable amenity on 350 acres ensures that you do just that. You’ll encounter an interesting mix of shops and experiences as you follow a boardwalk through a series of themed villages overlooking a lake. Surprise the kids with a teddy-making session at Build-A-Bear Workshop , or entertain aspiring magicians with the hilarious bag of tricks at Broadway Magic. For rock 'n' roll merchandise, head into the pyramid-shaped Hard Rock Cafe. Broadway features nearly 3 dozen restaurants and eateries as well as numerous attractions, amusements and nightspots. Oh, and lots of seagulls.

The Market Common (4017 Deville St.) is a new urban village, the first of its kind in Myrtle Beach. Central to this luxury lifestyle community is a charming block of upscale shops including Tommy Bahama, White House/Black Market, Anthropologie and Chico’s; there’s also a Barnes & Noble bookstore and several fine-dining restaurants.

Finding two Tanger Outlets with nearly 200 stores combined within a few miles of each other is just too good to be true. Each mall has in common its share of the name brands Tanger bargain shoppers have come to expect—Aerosoles, Brooks Brothers, Jones New York and OshKosh B'gosh, for example; however, many other sought-after brands are available only at one location. Before you begin a shopping spree, inquire about special offers and center-wide coupon books available at customer service stations at both the US 17 and US 501 Tanger Outlets.

More than 100 shops and three major department stores make Coastal Grand Mall (2000 Coastal Grand Cir.) the largest conventional shopping mall on The Grand Strand—and in the state. The Myrtle Beach Mall , at the intersection of US 17 and SR 22, includes an assortment of nationally recognized chains along with an adjacent Bass Pro Shops Outdoor World. Locally owned specialty shops touting fashion, artworks and gifts can be found at Rainbow Harbor Shopping Center on North Kings Highway.

A big neon sign on Ocean Boulevard just north of 9th Avenue points across the street to the Gay Dolphin Gift Cove . This multilevel emporium has a staggering array of gifts, collectibles, beachwear, shells, postcards, kitschy gifts and stuff that has nothing to do with beaches. You have to go, if only to brag that you’ve been to Myrtle Beach’s oldest souvenir shop. Be sure to exit through the back door to the boardwalk.

NightlifeThe partying begins long before sunset at beach hangouts such as Ocean Annie’s Beach Bar , at the Sands Ocean Club Resort on Ocean Boulevard. Live beach music, killer margaritas and balmy breezes inspire camaraderie on the large ocean-side deck. This is a fun place to chill out with locals and repeat resort guests. Phone (843) 449-6461.

For an amazing panorama, try the Pier View Open Air Bar on the 2nd Avenue Pier, where you can relish cooling sea breezes and gaze at the ocean while sipping a margarita or another refreshing libation. Phone (843) 445-7437. Beer aficionados will appreciate the bounty of brews at Dagwood’s Deli (400 Mr. Joe White Ave.), where locals cheer on their favorite sports teams in a cozy cranny similar to an English pub. Phone (843) 828-4600.

With three clubs under one roof, 2001 Nightclub (920 Lake Arrowhead Rd.) appeals to all ages. The cover charge gets you into Next Level for live and DJ-spun R&B, oldies, soul, funk and beach music in a relaxed atmosphere. Lounge seating, the hottest contemporary sounds and video-screen walls projecting what’s happening on the dance floor take Club Touch, on the second floor, to the next level in clubbing. The Stage presents local and regional talent with a variety of acts including blues, rock and country; this is also the place to experience air-band karaoke, where patrons can grab guitars and jam to whatever tune moves them. Phone (843) 449-9434.

By day, Celebrity Square at Broadway at the Beach (1325 Celebrity Cir.) is a quiet watering hole, a nice place to plop down for a daiquiri at Fat Tuesday ; phone (843) 444-3255. After dark, neon lights and pulsing music from several trendy clubs battle for club goers’ patronage while transforming the quadrangle into Myrtle Beach’s go-to entertainment district. Pay the cover charge at one of four Celebrations clubs and get free admission to the other three. Dress up or go casual, but honor the liberal code if you want to get in. Latin and hip-hop music infuses Club Boca: Celebrations with a South Beach vibe. A house band regularly belts the blues, oldies and pop music—in other words, something for everyone—at Froggy Bottomz , while Top 40 hits spun by dueling DJs enliven Malibu’s Surf Bar ; phone (843) 444-3500.

There’s more high energy and a lighted dance floor reminiscent of “Saturday Night Fever” in Revolutions , a retro dance club also on the square; phone (843) 444-8032. If you’d rather sing than dance the night away at Broadway at the Beach, duck into Crocodile Rocks and watch dueling piano players work the crowd; phone (843) 444-2096.

Those in search of some laughs can find them at Carolina Comedy Club , which brings the biggest names in comedy to Broadway at the Beach; phone (843) 839-2565.

Things to Do The Calvin Gilmore Theater 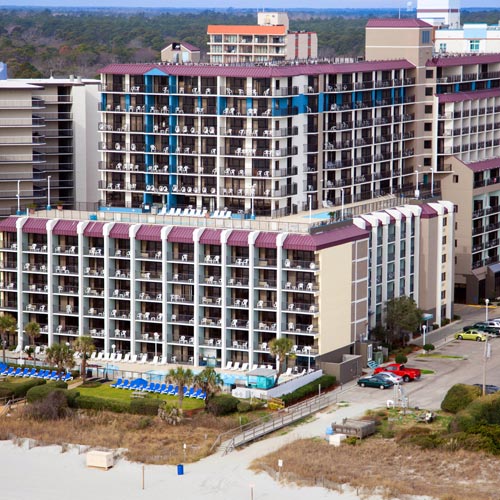