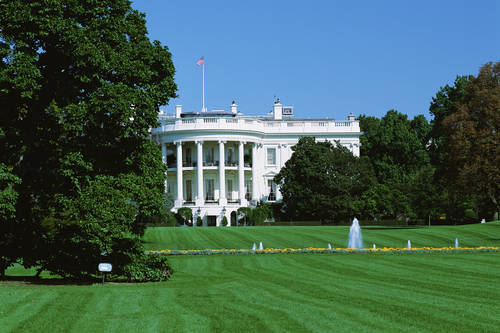 Getty Images/R Morley/PhotoLink
1 Photo
AAA Editor Notes
White House is at 1600 Pennsylvania Ave. N.W., within President's Park. Over the course of more than 200 years, the oldest structure in the District of Columbia has been periodically rebuilt, remodeled and redecorated to meet the needs of incoming administrations, although its core has remained steadfast. Every president except for George Washington has lived in the White House, and it is likely one of the few buildings in the city the founding father would recognize today. It is also the only building in the world that serves as the office and residence of a head of state as well as a museum open to the public.

Irish architect James Hoban's design, based on British country houses, was chosen for the presidential mansion in 1792, and construction was completed in 1800. In August 1814 British forces burned the building; only the sandstone exterior and interior brickwork survived. Under Hoban's supervision, the White House was rebuilt—and painted white—in time for incoming President James Monroe.

The Blue Room's hue was first applied during Martin Van Buren's administration; electric lights were first installed in 1891 during Benjamin Harrison's presidency. The West Wing, the location of the Oval Office, was constructed in 1902 and enlarged in 1909. Administrations from James Madison to Barack Obama have added historic items and decorative objects, making the White House a true treasure trove of Americana.

The fence that separates the public sidewalk from the White House North Lawn has undergone its own evolution. The first fence, a wooden split-rail barrier, was erected by Thomas Jefferson in 1808 to keep out wandering livestock. The current black iron fence—its bars topped with spear points called finials—has stood since 1965. In 2014, after an armed man managed to scale the fence and enter the doors of the North Portico before being apprehended, a linked portable fence was set up 12 feet from the sidewalk fence as an alternative to banning pedestrian traffic near the White House perimeter. The existing fence will be replaced by a nearly 13-foot-tall barrier to be completed by 2021.

If you're unable to take one of the very popular public tours, the White House Visitor Center has informative exhibits. And if you can't make it to Washington, the White House website offers a virtual tour of the premises.

Note: Street parking is not available. Tour requests must be submitted through a member of Congress and are accepted up to 3 months in advance; contact the United States Capitol switchboard to reach the appropriate representative or one of your senators. Tours are scheduled on a first-come, first-served basis approximately 3 weeks before the requested date. Every guest 18 years of age or older is required to present valid, government-issued photo identification with information that exactly matches the name previously submitted for clearance.