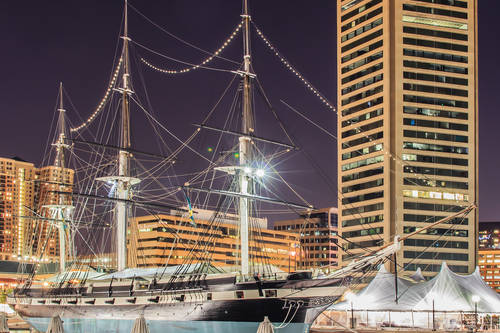 iStockphoto.com/chrisstadlerphotography
1 Photo
AAA Editor Notes
Inner Harbor is bounded e. and w. by President St. and Greene St. and n. and s. by Lombard St. and Key Hwy. Baltimore's No. 1 tourist attraction, the Inner Harbor—a designation that refers not only to the water but also to the surrounding downtown area—has been lauded as a model template for city waterfront redevelopment. The Inner Harbor still functions as an active commercial port, but the hotels, restaurants, shopping complexes and attractions that have sprung up over the last 4 decades are what lure millions of visitors annually.

In the 1960s city leaders made urban renewal of Baltimore's harbor their top priority. The USS Constellation was moved to Pier 1 in 1969, becoming the Inner Harbor's first tourist attraction. Others followed, and today the Inner Harbor is the site of four historic ships as well as popular tourist draws like the National Aquarium, the Maryland Science Center, the American Visionary Art Museum and the Top of the World Observation Level at the World Trade Center. Also adjacent to the harbor are the historic neighborhoods of Federal Hill, Fell's Point and Little Italy.

Geographically, the harbor marks the end of the northwest branch of the Patapsco River. While yachts, pleasure craft and sightseeing cruise boats constantly bob in the blue water and jaunty tall ships from around the world are frequent visitors, this is still an active commercial port, and you'll see working tugboats and massive, grimy tankers and freighters. A reminder of this workaday aspect is the 120-foot-tall Domino Sugar sign that stands watch over the harbor and is more easily visible at night, when it glows with red neon. Water taxis are a delightfully scenic way to get from one place to another.

Standing just off the Inner Harbor in Harbor East, in the center of the traffic circle at Aliceanna and President streets, is the National Katyn Memorial. Dedicated in 2000, it is a tribute to the thousands of Polish officers executed under Joseph Stalin at three Soviet Union concentration camps. Information panels describe the massacres as well as the memorial's striking design.