About LahainaOn the northwest coast 22 miles from Wailuku, Lahaina was once the whaling capital of the mid-Pacific. The warm waters are a haven for humpback whales, which come from the Arctic to mate and bear their young off the coasts of Maui, Moloka‘i and Lāna‘i. From December through May the whales, now protected from hunters, can be seen swimming and leaping.

The town name, which means “cruel sun,” comes from a description by a Hawaiian chief with a balding pate who was trekking across the mountain slopes behind the village. Today Lahaina bustles with tourists who come to browse the countless souvenir shops, clothing boutiques and art galleries lining Front Street, the town’s main drag. Lahaina also boasts the highest concentration of restaurants and bars on the island. Street parking is scarce, but there are several pay lots in the area; watch for signs along Front Street.

The fertile land and abundant freshwater springs so appealed to Kamehameha the Great that he established his capital on Maui after his conquest of the islands. Hawai‘i's first constitution was drafted in Lahaina in 1840. The 1859 courthouse near the harbor, built with coral and lava blocks taken from the ruins of Kamehameha III's rarely used palace, was declared the finest government building in the islands at the time.

Hale Pa‘ahao (Stuck-in-Irons House) on Prison Street was a wooden jailhouse surrounded by a thick wall built from coral and lava blocks from the demolished Old Fort 1852-53. Its primary use was to hold drunken sailors until they were bailed out by their captain. The 1834 Baldwin Home at the corner of Front and Dickenson streets contains furnishings, photos, medical books and records from the missionary era.

Other historic structures are the 1828 Waine‘e Church, said to be the oldest stone church on the islands, and the 1831 Lahainaluna High School, considered the oldest secondary school in the United States west of the Rocky Mountains. The school contains Hale Pa‘i, a coral-block print shop where the first Hawaiian-language newspaper was printed.

Maui Theatre, at 878 Front St., features a 75-minute theatrical production called “‘Ulalena.” The word refers to a wind that is unique to Maui and a twilight rain that is red and yellow in color. Traditional Hawaiian chants, sounds and dances combine with acrobatic feats and haunting music to tell the history and legends of Maui. The show begins with the stories of the islands' mythic creation as well as the various people who reached them, including Polynesians, Capt. James Cook and more recent inhabitants. Portrayals of mythology, village life, Hawaiian monarchy and nature are featured. Special effects, lighting and surround sound add to the experience. Phone (808) 856-7900.

Self-guiding ToursThe Lahaina Historic Trail (Ala Mo‘olelo O Lahaina) consists of 62 historic sites, 30 bronze interpretive signs along Front Street, 10 interpretive plaques on buildings and the remains of the Lahaina Walking Tour numbered signs. Maps are available at the visitor center in the Old Lahaina Courthouse at 648 Wharf St. A descriptive brochure can be obtained from the Baldwin Home at the corner of Front and Dickenson streets. 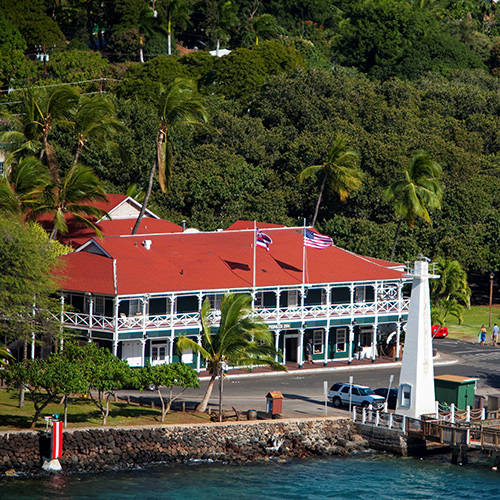