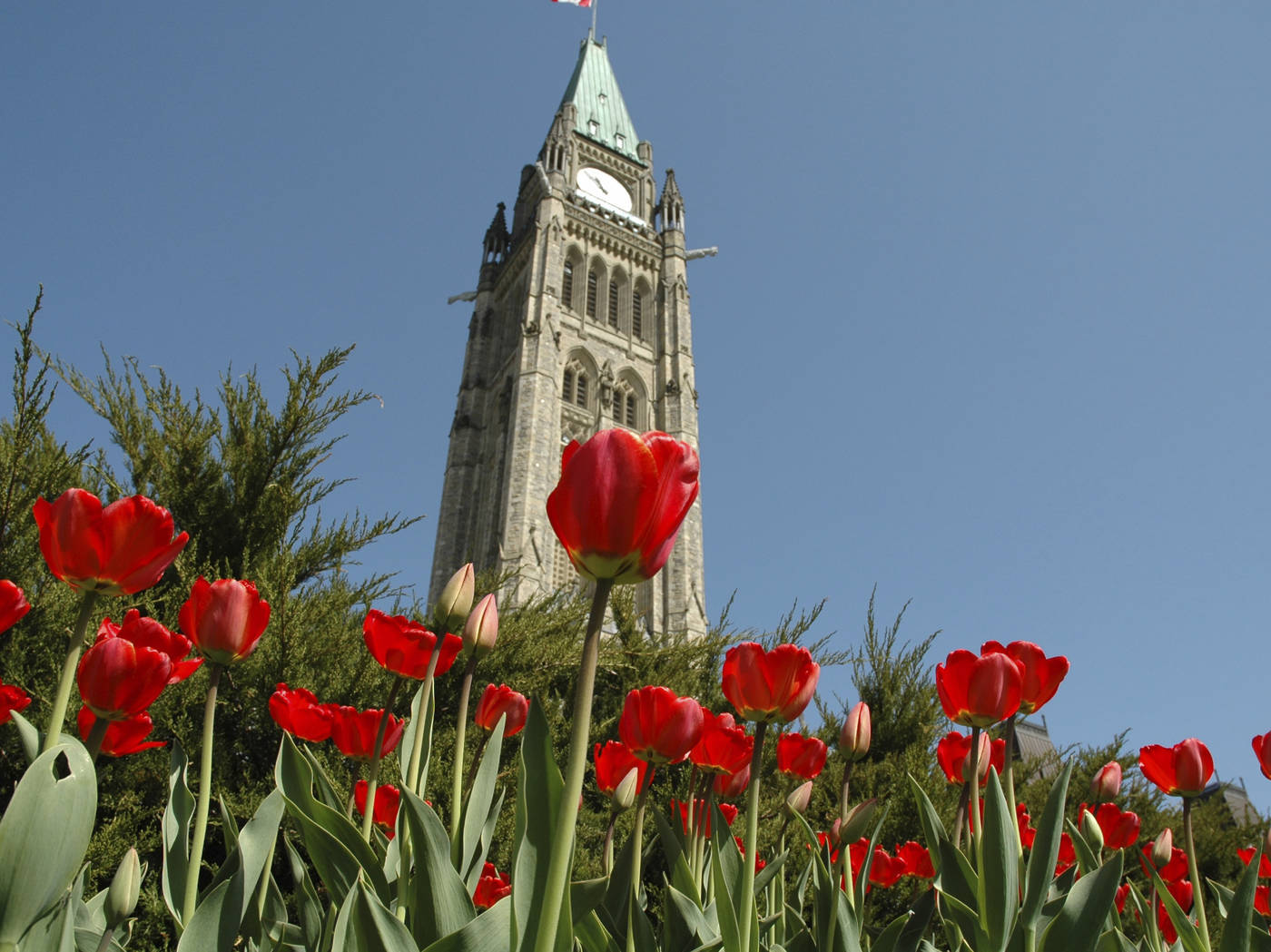 Introduction In 1857, Queen Victoria selected Ottawa as Canada's capital. Legend has it that the monarch was inspired by romantic watercolor sketches she'd seen of the area. Today's visitors can see the same beauty in the city's elegant buildings, its tree-lined streets and more than 70 municipal parks and gardens. 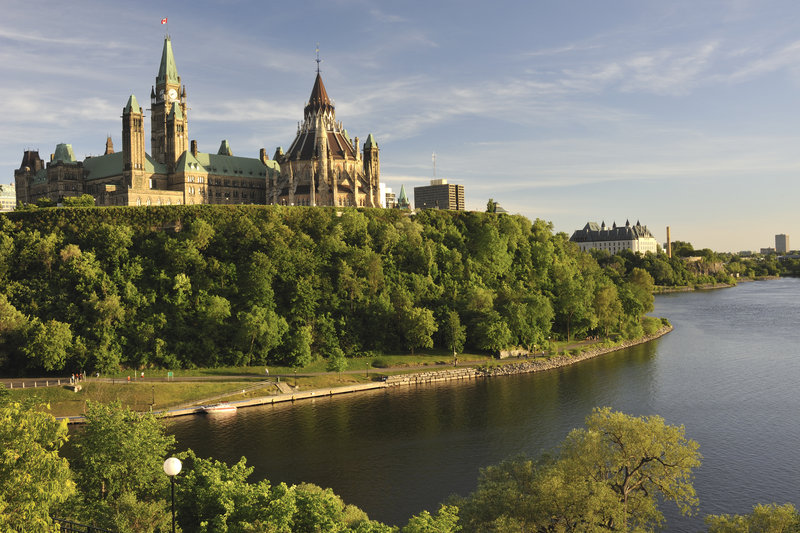 AAA/iStockphoto.com
Notre-Dame Cathedral Basilica, with its twin Gothic spires, is one of the most recognizable landmarks in the city skyline. Just a few kilometres away are the three mighty Parliament Buildings overlooking the Ottawa River. Their verdigris-tinged roofs and formidable stone walls form a striking backdrop to a time-honored ritual—the Changing of the Guard—and a Big Ben-style clock and tower make it seem all the more English. (After all, Canada is still a member of the British Commonwealth.) After the ceremony, guards in scarlet tunics and black fur helmets stand sentry at Rideau Hall. And no, they never crack a smile. 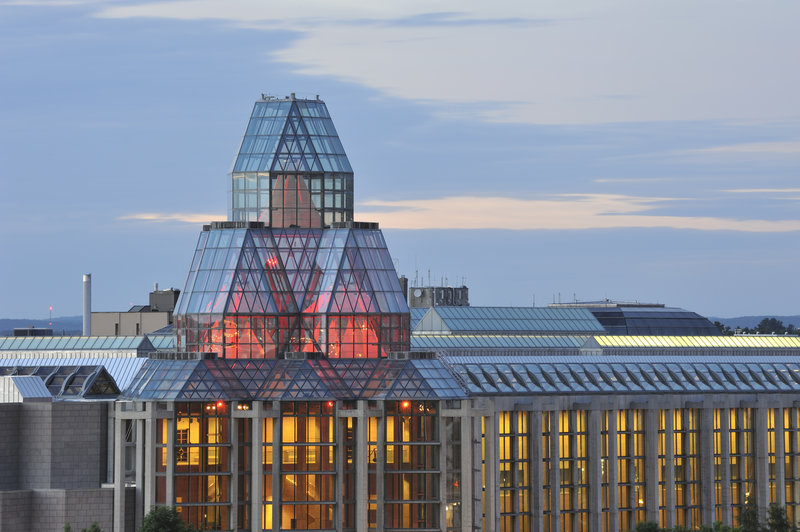 AAA/iStockphoto.com
Ottawa's wealth of cultural attractions ranges from the Canada Science and Technology Museum to the Diefenbunker, Canada's Cold War Museum. For riches of a different sort, head to the National Gallery of Canada, home to a stellar collection of Canadian art, as well as works by prominent European and American artists, including Cézanne, Chagall, Picasso and Warhol. Learn all about military history at the Canadian War Museum and Diefenbunker, Canada's Cold War Museum. 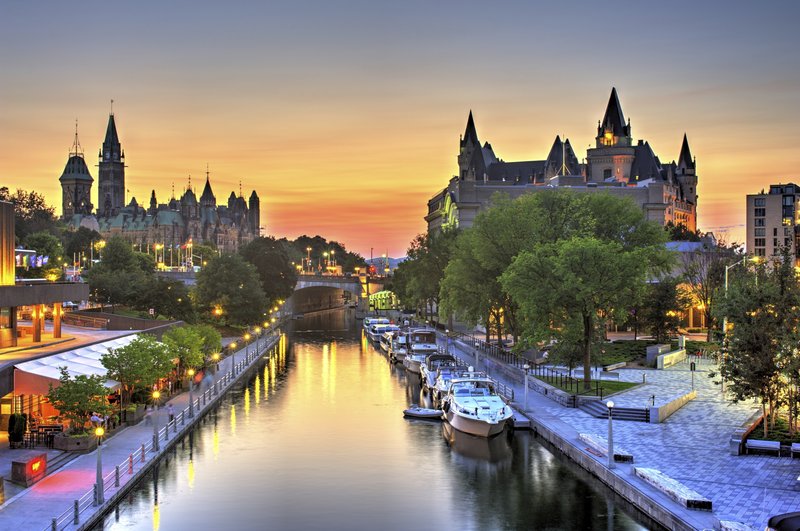 AAA/iStockphoto.com
One of the city's most popular recreational facilities is the Rideau Canal, a 19th-century waterway for summer canoeing, inline skating and bicycling. In the winter, the water freezes into a one-foot thick sheet of ice, perfect for ice-skating. In addition, snow on the ground transforms the bicycle paths into hiking and cross-country skiing trails. If you happen to visit Ottawa in winter, tie on some skates, slide through the city and stop to enjoy warm refreshments along the way; concession stands line the canal and sell hot chocolate and beaver tails (a doughnut-like treat).

By CarThe major east-west arteries along the south side of the Ottawa River are Hwy. 17 (a segment of the Trans Canada Highway to the west of the city) and Hwy. 417 (the Queensway, also a segment of the Trans Canada Highway). Hwy. 417 provides freeway driving in the metropolitan area and good connections with main intersecting thoroughfares. Along the north side of the river, in the province of Québec, is the lightly traveled Hwy. 148. This highway, along with Hwy. 50, provides east-west access.

To the north, hwys. 5 and 105 funnel traffic coming down from the woods and lakes of Québec, providing good bridge connections from Gatineau, just across the river.

Approaching from the south and southwest, Ottawa-bound motorists usually traverse at least a portion of Hwy. 401 (Macdonald-Cartier Freeway), a route that skirts the north shores of the St. Lawrence River and lakes Ontario and Erie. From this thoroughfare a number of connecting routes provide good options.

Hwys. 416 and 31 head north from the 401 to Ottawa, the former to the west of downtown (hooking up with the 417) and the latter directly into downtown.

Street SystemWhen negotiating the city, keep in mind that the Parliament Buildings and the Fairmont Château Laurier hotel, the city's most famous landmarks, are at the northern border of Ottawa with their backs to the Ottawa River—the dividing line between Ottawa and the province of Québec. Directions are often given in relation to these structures. The Rideau Canal, which runs roughly north to south through the heart of the city, also can help visitors get their bearings.

The main east-west artery is the Queensway (Hwy. 417). The Queen Elizabeth Driveway parallels the Rideau Canal on the western side, while Colonel By Drive follows the canal on the eastern side. The Sir John A. Macdonald Parkway (formerly the Ottawa River Parkway), curving along the Ottawa River, leads from downtown to the western section of the city, where a number of government buildings and residential sections are. The Sir George-Étienne Cartier Parkway (formerly the Rockcliffe Parkway) leads to the eastern section of the city, parallel to the Ottawa River.

Colonel By Drive and both the Macdonald and Cartier parkways are closed Sunday 9-1, Victoria Day through Labour Day, for the exclusive use of bicyclists, in-line skaters and joggers.

Parliament Hill is on Wellington Street, which becomes Rideau Street in front of the Fairmont Château Laurier hotel. Another road whose name changes for no apparent reason is Baseline Road, which suddenly becomes Heron Road. Somerset Street West downtown becomes Wellington Street West and then Richmond Road as it progresses westward.

The Mile of History, or Sussex Drive, is a boulevard that follows the contours of the Ottawa River in the northeastern section of the city. The prime minister's and governor-general's residences as well as many embassies are along Sussex Drive. The main bridge spanning the Ottawa River and connecting the cities of Ottawa and Gatineau, Québec, is the Macdonald-Cartier Bridge.

Left turns on red from a one-way street to another one-way street and right turns on red are permitted unless otherwise posted. Wearing seat belts is mandatory in both Québec and Ontario. All speeds and distances are in metric measurements. Some gas stations in the downtown area close in the evening, but a few in the environs are open 24 hours.

ParkingOn-street parking in Ottawa is limited, though persistence may be rewarded. When and where on-street parking is permitted, regulations are strictly enforced; visitors should be careful to note the time limits on parking meters and signs. Most downtown parking is free after 5:30 p.m. and on weekends; check meters to verify free times. Some downtown streets have no-stopping zones during the morning and/or afternoon rush-hour periods. These are strictly enforced. Winter overnight parking regulations, allowing access for snow clearing, are effective from mid-November through April 1, and are dependent on day-to-day overnight snow forecasts. Call 311, or TTY (613) 580-2401, or tune in to local media for news updates.

Various pay-and-display machine lots and garages around the city charge $2-$5 per hour or $6-$18 per day. There also are public parking garages at the National Arts Centre and the World Exchange Plaza.

Public TransportationPublic transportation in Ottawa means OC Transpo. Both inexpensive and convenient, the buses are used by the majority of Ottawans to get to and from work. The system has Park & Ride lots and extensive routes throughout the region, and it has a bus-only rapid transit system called the Transitway; buses operate daily 24 hours a day.

Most OC Transpo buses in Ottawa are red and white, while Québec buses, which also use some Ottawa routes, are blue and white. Basic fare is $3.65; express routes are $5.15. A day pass costs $8.50. Exact change is required. Maps of OC Transpo routes are free from OC Transpo offices, where tickets are sold, at the Rideau Centre and in transit stations at St. Laurent, Lincoln Fields and Place d’Orléans. Tickets also are available at other outlets. For information phone (613) 741-4390, TTY (613) 741-5280.

In addition, the city offers the O-Train that operates daily 6 a.m.-midnight. Tickets cost $3.65 and are available on the platform using exact change. A day pass costs $8.50. 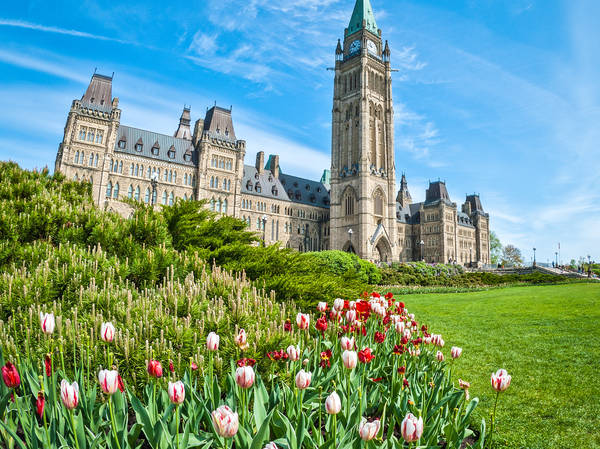 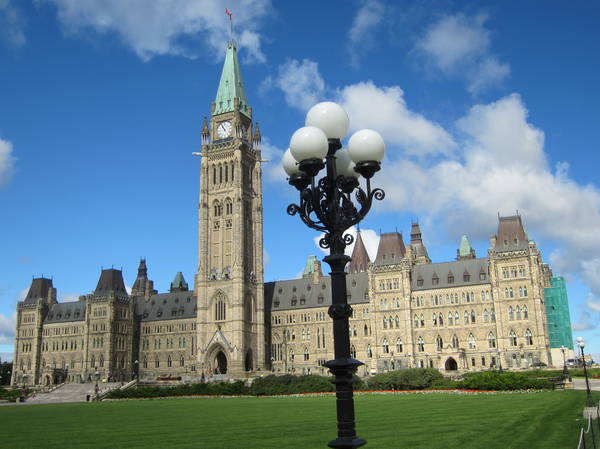 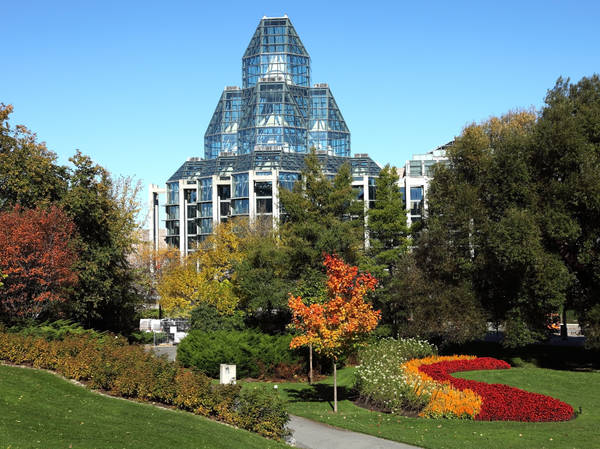 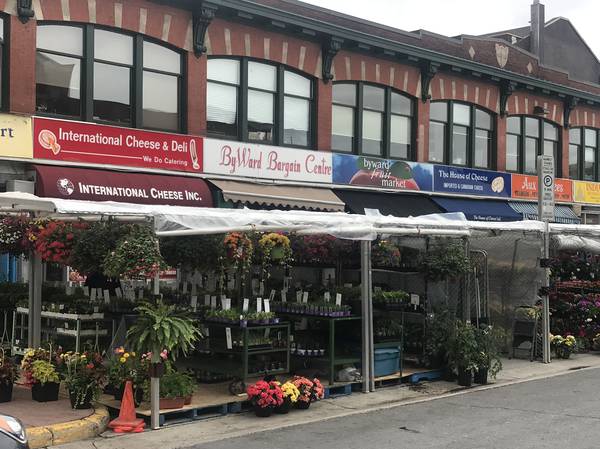 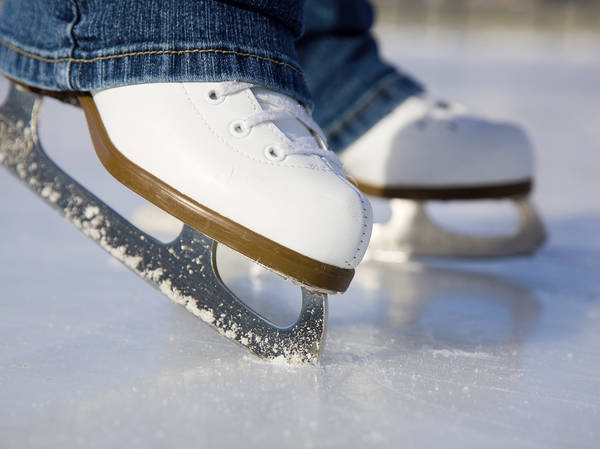 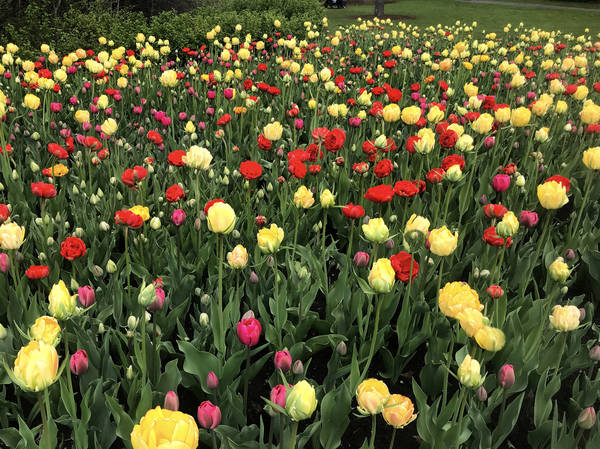 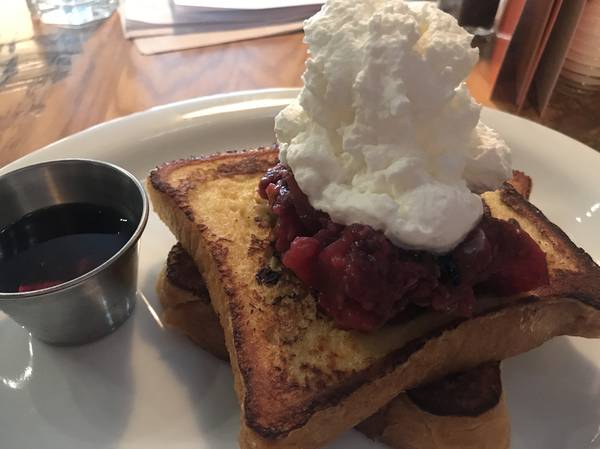 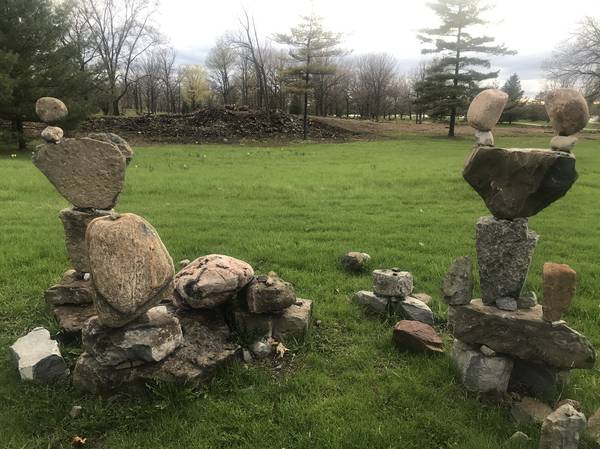