The bond between entertainer and audience is particularly strong in Branson. For one thing, it's easy to meet the stars—just head on down to the stage during intermission at practically any show, when cast members come out to meet, greet and sign autographs. Visitors come back year after year not only to see old favorites, but for the experience of watching young performers mature into showstoppers. And while the cast of characters is constantly changing in a town that offers more than 100 different performances, many entertainers have logged years, even decades, on Branson stages.

Bass player Clay Cooper, born into a musical Texan family, began singing in Wylie, Tex., at age 14 and moved to Branson in 1986. He performed at the Ozarks Country Jubilee and the Buck Trent, Jim Owens and Paul Harris shows before becoming host of the musical revue Country Tonite. Cooper currently headlines Clay Cooper's Country Express at the Clay Cooper Theatre, across from Titanic—World's Largest Museum Attraction on SR 76. Like many other Branson performers Cooper's show is a family affair, with daughter Cassidy and son Colt sharing the spotlight.

Speaking of talented families, this town overflows with them. The Haygoods—Timothy, Patrick, Dominic, Michael, Matthew and Catherine—have performed in Branson for years. These multitalented siblings sing, dance, show off serious acrobatic moves and play an impressive variety of instruments (fiddle, guitar, saxophone and harp, just to name a few). The Duttons—four brothers and three sisters, plus Mom and Dad—display equally formidable instrumental prowess on banjo, guitar, fiddle and harmonica. Their show, like many others, emphasizes the joys of family, as when the youngest Duttons come rolling out in a bathtub to a rollicking version of “Splish Splash I Was Takin' a Bath.”

The five Hughes Brothers, originally from Taylorsville, Utah, started out performing at Silver Dollar City in 1995, then progressed to the Strip, co-headlining with the Platters before acquiring their own theater. In addition to performing six days a week, the brothers produce, direct and choreograph every aspect of their high-energy, foot-stompin' show.

The Mabe and Presley families have been playing Branson longer than anyone else. The Mabes' Branson's Famous Baldknobbers and the Presleys' Country Jubilee are both musical extravaganzas featuring a little bit of everything that adds up to good old-fashioned entertainment: smooth singing, accomplished guitar pickin', goofy comedy and unabashed patriotic pride. The songs range from big-band era chestnuts to Top 40 hits, but classic country—along with bluegrass and gospel—is at the heart of both of these shows. And the generations appearing together on stage send a heartwarming message that Branson is, first and foremost, all about family. 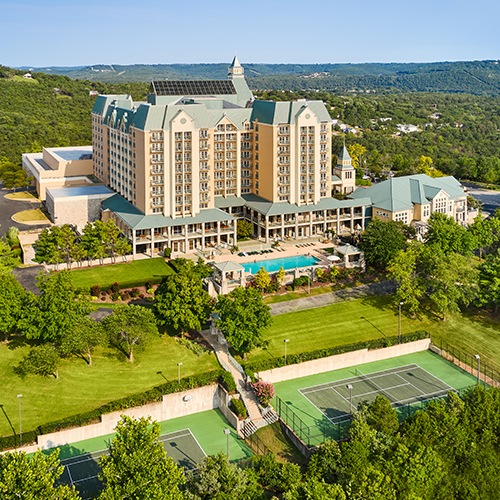 Chateau on the Lake Resort & Spa